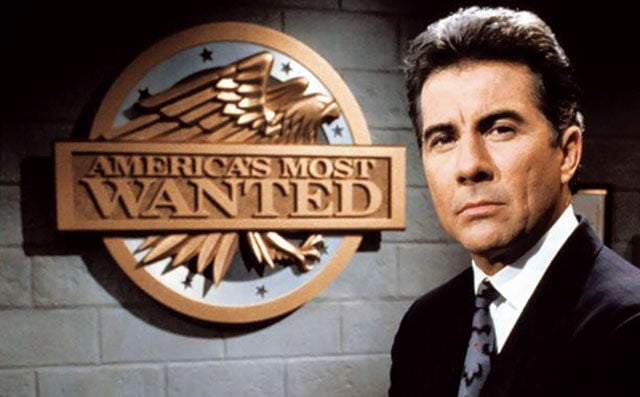 America’s Most Wanted was created and hosted by John Walsh, whose 6-year-old son Adam was kidnapped and murdered in 1981. The program ran from 1988 to 2012, and contributed to the capture of more than 1,000 fugitives. 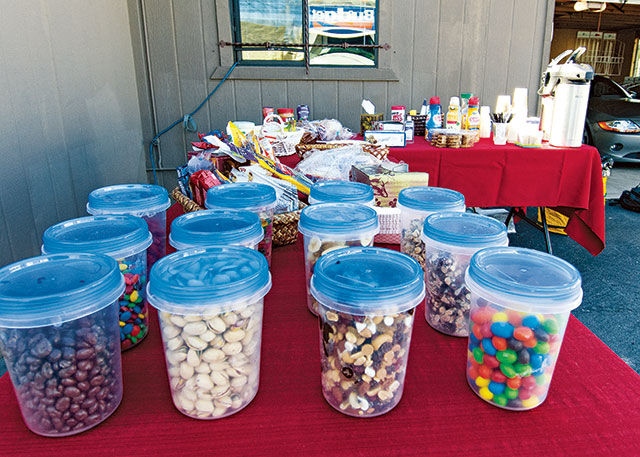 The Arcadia News staff was invited to join the crew for food and drinks, and the catering specialist politely refilled the gummy bear container more than once for our office. 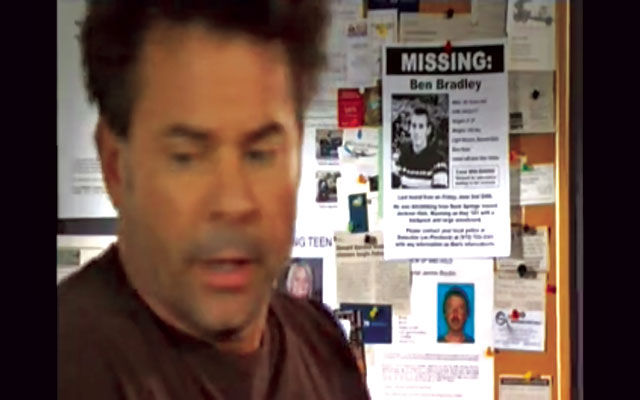 In one of the scenes, an actor portrayed Tommy Bowman, who walked into the Rock Springs Sheriff’s office for an unrelated matter, but noticed the Missing flyer on the wall. Bowman claimed to have found Bradley’s backpack floating in a river that was 70 miles away from where he was last reported. 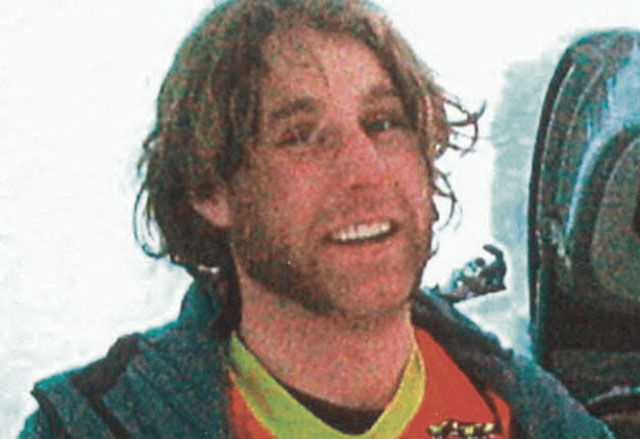 Over a period of just eight hours, the Arcadia News building was converted into the Rock Springs, Wyoming Sheriff’s office. The Ben Bradley homicide case was cold at the time of filming, and police hoped America’s Most Wanted would help them receive additional clues or information.

America’s Most Wanted was created and hosted by John Walsh, whose 6-year-old son Adam was kidnapped and murdered in 1981. The program ran from 1988 to 2012, and contributed to the capture of more than 1,000 fugitives.

The Arcadia News staff was invited to join the crew for food and drinks, and the catering specialist politely refilled the gummy bear container more than once for our office.

In one of the scenes, an actor portrayed Tommy Bowman, who walked into the Rock Springs Sheriff’s office for an unrelated matter, but noticed the Missing flyer on the wall. Bowman claimed to have found Bradley’s backpack floating in a river that was 70 miles away from where he was last reported.

As part of our anniversary celebration throughout 2017, we will feature some of our favorite stories from the past 25 years. These will include some of our award-winning stories and photos, and re-prints of the unique articles that make this publication special. These stories are easily identified with our “25th Anniversary Feature” banner.

Publisher’s Note: In March 2009, two people walked into our office at 39th Street and Indian School Road and explained that they were location scouts for a television production company. They were interested in using our office as a location to film a re-enactment scene for a famous television show, America’s Most Wanted.

Since the crew was already filming some of the episode in the area, they were pressed for time. They offered some money for the use of the office, and assured us they would take good care of the space (also noting they had a million-dollar insurance policy in case of any issues). I agreed to close the Arcadia News for a day, if for no other reason than this might make a good story. Plus, it was a lot of fun to see our office immortalized on an internationally-famous television show.

This was the 24th episode of the 22nd season of AMW, and it was filmed in Phoenix, Cayucos, CA, Jackson Hole and Rock Springs, WY. The show was at our office for roughly eight hours, but before they did anything, two people went through and photographed and documented nearly every square inch of the place. They promised to put everything back where they found it. After a day of chaotic activity, it was impressive watching them go back and analyze all the photos to restore the office to its exact original condition.

While the crew did bring in a lot of props and furniture, they used our bulletin boards, computers and numerous piles of paperwork as part of their set. The rest of it – including the interrogation table – was brought in from two large moving trucks teeming with props, furniture and costumes.

I was surprised how much time went into the lighting. They blacked out our windows and brought in numerous light stands, light boxes, filters and reflectors, all set up by at least a dozen lighting and tech guys. In the end, they spent maybe half an hour doing the actual filming. I knew there would be some editing, but since they spent so much time at our office, I thought our building was going to be a big part of the show.

Out of the 24-minute episode, the Arcadia News building appears for a total of 83 seconds. Which worked out well, since we got a nice story out of it.

Who Killed Ben Bradley? (From the March 2009 edition)

By Greg A. Bruns

The last time anyone heard from Ben Bradley was when he left a voice message with friends, letting them know he was a couple hours away. Ben had already hitchhiked nearly 500 miles on his way to celebrate his 29th birthday in Jackson, Wyoming. As an avid snowboarder, Ben loved taking backcountry trips and carving fresh snow. This trip from his home in Tabernash, Colorado was one that he had taken many times before. With his backpack and snowboard slung over his shoulder, Ben stuck out his thumb and counted on the kindness of strangers to get him to his destination.

Four months after that phone call, Ben’s body was discovered by tourists near Boar’s Tusk, Wyoming. This was about 25 miles off his course, so police believe he was dumped there. His backpack was found in a reservoir by a guy on a jet ski months later, but his custom snowboard never turned up. The man who found the backpack and turned it over to police was questioned, but was not charged with a crime. Ben’s one-of-a-kind snowboard is likely the key to unlocking this murder mystery.

I know all of this because in a span of eight hours, the Arcadia News office was transformed from the little community newspaper in Phoenix

into a little community police station in Rock Springs, Wyoming. It was an impressive task, all done with no fewer than 75 people. All the caterers, lighting techs, dolly grips, cameramen, directors, producers and gophers worked with such efficiency and accuracy, that the entire office was morphed quite convincingly into that little police station. The production company used our building to film some of the re-enactment scenes for the Ben Bradley case, which appears in episode 24 of season 22 of the popular television show, America’s Most Wanted.

I’m sure our neighbors were nervous when they saw the 50-foot Winnebago pull into the parking lot. The RV was the actor’s trailer, and acted as a retreat for some of the production crew while the scene and lighting crews were setting up. Shortly after the RV arrived, the lighting trucks and personnel vehicles came drifting in. All-in-all, I would estimate 25 vehicles settling around our parking lot and flowing over into the neighborhood. I figured it wouldn’t be a big deal for a single day of shooting, but there was also a local police officer around to handle traffic and field one neighbor’s query about permits.

At lunchtime, a giant catering truck started serving some outstanding food. Our office was invited to partake, and with tables and chairs setup under shade awnings, we finally got good use out of our winter lawn. One of the actors–a bulky 6-footer wearing a prison jumpsuit–was enjoying a slice of chocolate cake when the neighbor came over to ask about the permit. He did a double-take of the ‘prisoner’ and the cake, then skulked back home.

One of the producers explained that the catering was excellent for a reason: to make sure everyone sticks close-by and doesn’t wander off in search of food. I thought it was a union thing, but that was quickly dismissed, as a snack table was set up with everything from gummy bears to pistachios and 30 other treats in between. I stuffed as many gummy bears as I could fit in my pocket and took off, to leave them to the task at hand.

The setup of the scenes, and the positioning of the lighting and other equipment, accounted for more than six or seven of the eight total hours this went on. The actual filming time, including the different “takes” for lighting or other corrections (“What’s my line?”), was less than 30 minutes. When I arrived back at the office after an afternoon in the field, I was told they were filming the final scene for the day: our conference room was now the interrogation room. I peeked around the corner to catch the last of the scene, and heard the director say “...and CUT!”

Once they finished filming and putting away the equipment, two scene specialists walked around our office and morphed the entire place again, this time back into the Arcadia News. Every single item that was moved was put back exactly as it was before, using digital photos they took upon arriving as a guide. It was Cat in the Hat efficiency at its finest, and I went home that night excited to see the final product.

In speaking with one of the executive producers of AMW, I was informed that more than 1,000 bad guys have been found thanks to the show. It feels right to be a part of that in our own little way.

End note: As of April 2017, Ben Bradley’s murder is unsolved, but in December 2016, detectives received some new information in the case, which helped them get a little closer to Ben’s killer. Police are confident that they know the people involved, and they are hoping for more concrete evidence to surface. See Ben’s story at: https://vimeo.com/24325842.