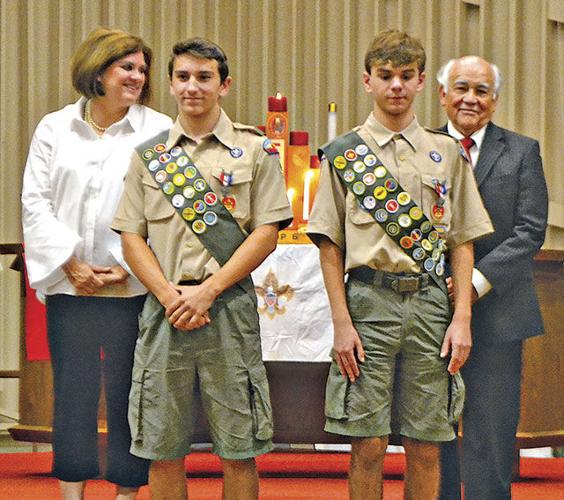 Jordan and Jacob Lara received their Eagles in September. 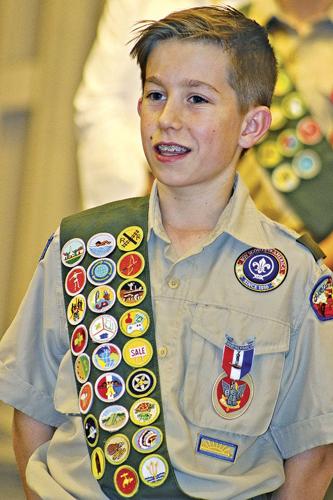 (left-right) Ruben, Jordan, Jacob, Jared and Jacque. The Arcadia family appeared on our cover in December 2002, after the twins were born.

Jordan and Jacob Lara received their Eagles in September.

Jordan and Jacob Lara made their first appearance in the Arcadia News in December of 2002. The twins were just weeks old when they graced the cover with their parents Ruben and Jacque, and their two-year-old brother Jared.

Fifteen years later, Jordan and Jacob are back in the news after accomplishing an impressive feat.

In a September ceremony, they were awarded the rank of Eagle, the highest achievement or rank attainable in the Boy Scouting Program of the Boy Scouts of America.

“It was an incredible feeling,” Ruben said. “It really was the ultimate feeling of parenting, saying how incredibly proud we were of them. Not just because of what you did, but because you did it yourself.”

The boys started in Cub Scouts when they were young, and continued through elementary school. But making the choice to go for the rank of Eagle isn’t a decision to be taken lightly, as the requirements take years of time and energy to fulfill. Requirements include earning at least 21 merit badges, and the twins were starting to fill up their after-school time with extracurricular activities. Jacob was playing multiple sports, while Jordan was following older brother Jared into theater productions. Finding the time to continue pursuing the rank of Eagle was going to be a time crunch.

“It was a hard thing to decide whether or not to do it,” Jacob said. “I knew it would take time out of some after school activities, and I was already busy with school and sports. But it has always been a goal for Jordan and I to have a chance to accomplish this.”

Although achieving the rank of Eagle requires a time commitment and hard work, both boys feel that they are better off having done it. Scouts learn a variety of skills that are applicable to many different scenarios in the real world.

“I mean, you name it,” Ruben said when asked about the benefits of being a part of Scouts. “It teaches socialization skills, helps kids develop a sense of time management, learning about responsibility and being in charge. They learn about business management, checkbook balancing, home economics, public speaking. All skills that are so helpful for kids to learn at such a young age.”

The boys also had to undertake and design a final project that would be both meaningful and beneficial to the recipients. Jacob designed a xeriscape from a 1,500-square foot grass area in front of Prince of Peace Lutheran Church, in order to give the church community a place to gather. Jordan created a French drainage system, and designing it so that the water would flow away from the wall near the congregation area of the church.

“Most of the stuff for the projects were really hard to get,” Jordan said. “We were really happy that people donated their time to help us.”

The years of hard work finally paid off at the Fall Court of Honor, where the boys received their Eagles alongside Jack Landon of Arcadia High School and Jacob Denious of New Way Academy.

“It really struck me how different the roads were for my two boys to them getting here,” said Jacque, who spent years volunteering with Scouts in a variety of positions. “These two completely different kids, with different interests, who took different paths to get here. Seeing them pursue their individual interests and still get to achieve their goals together was really wonderful.”