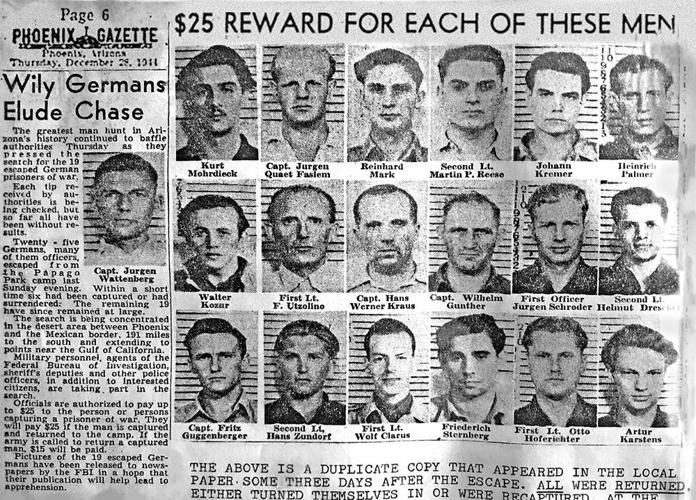 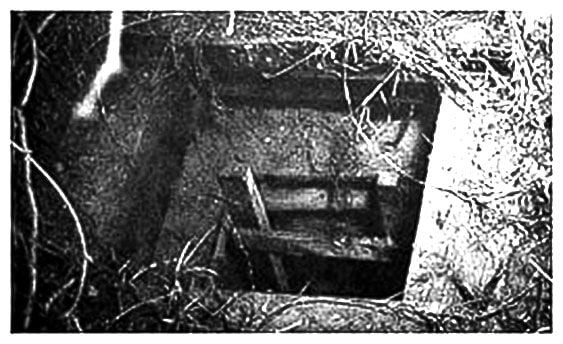 The entrance to the escape tunnel used by German prisoners at Camp Papago Park, AZ, in 1944.

A view from the guard tower into the German Officer’s Compound (Compound 5) at Papago Park during WWII. The building with the tall chimney is the camp power plant.

During World War II the most famous prisoner-of-war camp in America operated less than a half-mile south of Arcadia. Camp Papago Park property began a block south of Thomas Road and extended south to McDowell Road. The western-most border was 62nd Street and ran east to the Crosscut canal (roughly 66th Street, meandering southeast). With a capacity of about 3,000 prisoners, Camp Papago Park became famous after “The Great Papago Escape” in December of 1944.

The largest escape in history of Axis prisoners on American soil, the breakout was accomplished via a 178-foot tunnel that ranged from 8 to 14 feet under the camp, and was hollowed out over a period of three months. The prisoners had convinced their American captors to allow them to build a volleyball court in the compound, which was instrumental in the distribution of the hard desert soil brought up from below.

After the escape, the Phoenix Gazette front page was emblazoned with mug shots of the 25 escapees and information that triggered the largest manhunt in Arizona history. A reward of $25 a head was offered for the capture of any fugitive. All of the prisoners eventually turned themselves in or were captured.

After the war, some of the park served as a Veterans Affairs hospital until 1951 and then an Army Reserve facility. Most of the area has since been developed with single-family homes.

Today, only a sliver of evidence remains of the one-square-mile Papago POW camp. The Officers Club building (#40 on the map) is still standing, now occupied by the Scottsdale Elks Lodge and the El Molino Mexican Cafe. In the same area, one of the POW houses remains, although it is boarded up. There are also concrete footings of one guard tower behind the Army Reserve Center building.