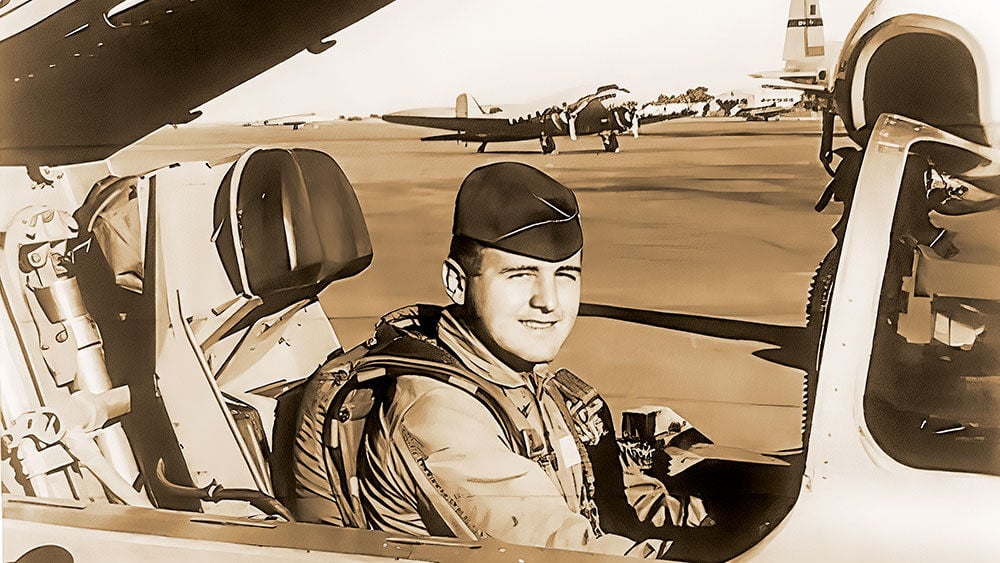 Retired USAF Major Van Heywood in his F100 Super Saber in Tripoli, Libya at Wheelus Air Force Base. In 1962 he was training with ground targets before his departure to southeast Asia. 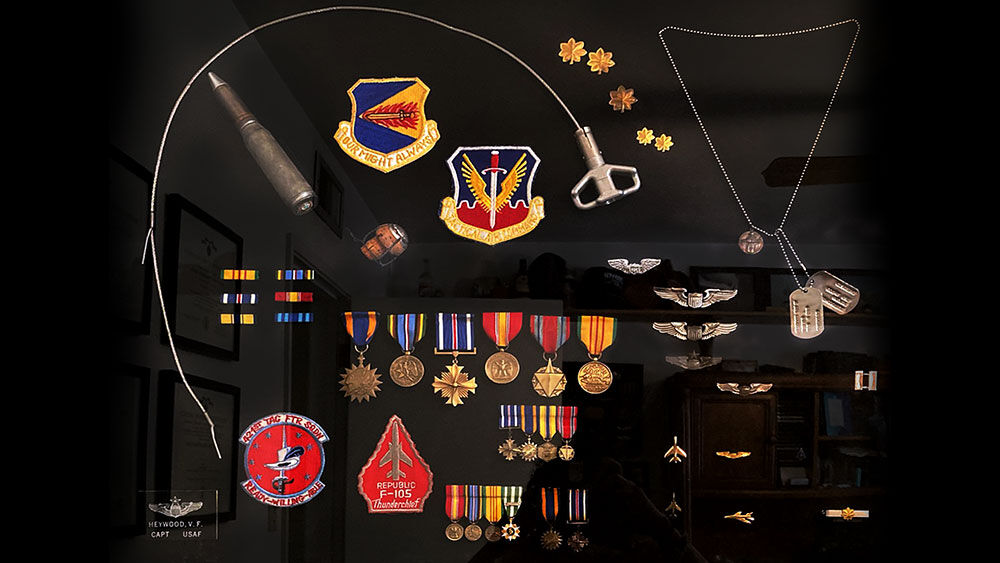 Heywood’s honors: The Distinguished Flying Cross is 3rd from left. The rip cord is one he pulled when he bailed out of his plane during a mission. The cork is from the champagne bottle he was greeted with when he returned from his hundredth mission. 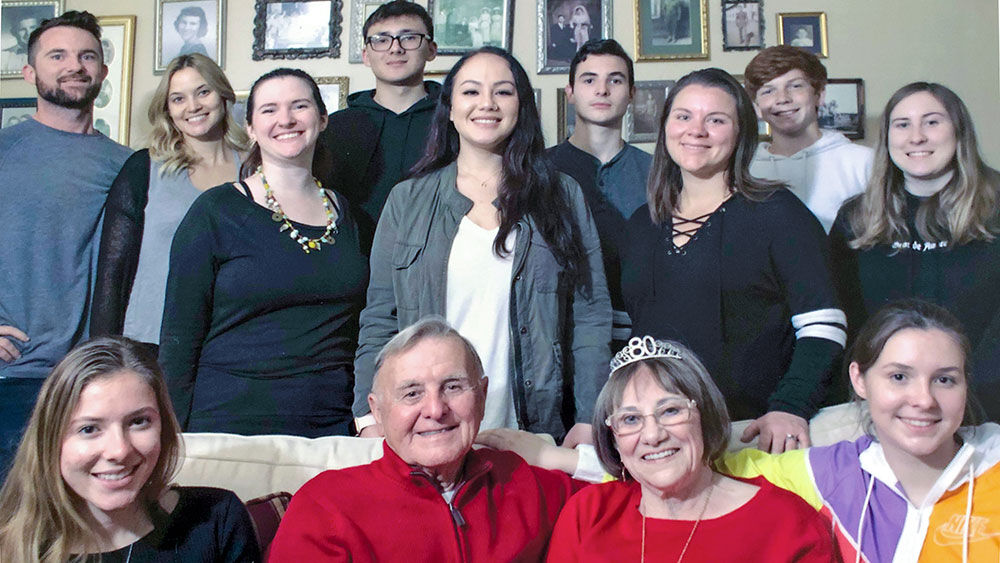 Heywood and Corinne with 11 of their 15 grandchildren.

Retired USAF Major Van Heywood in his F100 Super Saber in Tripoli, Libya at Wheelus Air Force Base. In 1962 he was training with ground targets before his departure to southeast Asia.

Heywood’s honors: The Distinguished Flying Cross is 3rd from left. The rip cord is one he pulled when he bailed out of his plane during a mission. The cork is from the champagne bottle he was greeted with when he returned from his hundredth mission.

Heywood and Corinne with 11 of their 15 grandchildren.

A perfect day for Van Heywood would be to spend time hiking and hanging out with friends and family. But in 1958, when he joined the United States Air Force, his days were, well, a little different.

Heywood was born in an old farmhouse on Extension and Broadway Road in Mesa in 1936. He’s lived in the Grand Canyon state since, attending area schools and eventually getting a college degree in education and music from ASU.

While there, Heywood and some friends decided to join the Reserved Officer Training Corps (ROTC). After graduation, he was tested and chosen for flight school, and was awarded an officer’s rank right out of college.

While in the military, Heywood was a jet pilot. He flew an F-105 Thunderchief and a F-100 Super Saber, the first fighter bomber series, allowing the soldiers to play different combat roles.

“In addition, I was a Wild Weasel. The Wild Weasels were a top-secret program designed to take out Surface to Air Missile sites (SAM sites) that would shoot our airplanes down. We were the first Wild Weasel flight to take out a SAM site successfully,” he said.

Heywood shared one particular mission that he will never forget: His first SAM strike, right before Christmas in 1965.

“To start, I flew about 12 Iron Hand (joint USAF-USN) missions. The technique we used was what we described as trolling (like the technique used in fishing). We acted as the bait, and the SAM site was the fish,” he said.

“In the designated area, we would fly in a loose and flexible formation. Many times a missile site would come up and start tracking us. We would start a turn toward the site to try and set up an attack. It seemed that the missile guys got the word about what we were up to, and when we turned toward the site, it would go off the air. We didn’t seem to be getting anywhere with the tactics we were using.”

“I could hear another flight in our area trying to join up after attacking a target. One of their flight had been hit, and they were trying to get him out of the target area along the Red River.”

“We were coming into the flat, open area bordering the Red River in SE Asia. We were fairly low, and the Weasel was making as many knots as I think he could get out of the F-100F. In not more than what seemed like two minutes, the Weasel called the SAM site swinging off our left. We all started a turn, and a voice transmitted excitedly, ‘I’ve got him.’

“As we continued turning, I saw two long, slender tubes on what appeared to be a transporter. They were pointed up at about 60 degrees and stuck out just barely beyond the tree line. ‘Missiles,’ I said to myself.”

“We had four LAU-3 rocket pods with 19 rockets in each pod, and I had armed up all four pods to fire at once. If I got only one shot, I wanted it to be a memorable one. Even though we were getting flak from the river, I concentrated on my run and wasn’t about to let the flak deter me. I steadied just long enough to get my sight picture for the rockets and fired. What an impressive sight! Seventy-six rockets were spewing out in front of my aircraft, and I was sure that the guys on the ground were impressed.”

“I elevated the gunsight piper on my second attack, held the trigger down, and gently walked the rudders until the gun fired out. The target was by now a roiling, boiling mass of dust and debris in which nothing could be seen except a few of the taller trees. I felt a little disturbed when the Weasel started calling out, ‘Everybody get down; he’s on us.’ After a couple of calls like that, I started thinking, ‘How is that possible?’ It wasn’t until later I found out another SAM site over by the river came up and was trying to get a shot at us.”

Heywood ended his tour as a Major in 1987 after earning various medals of honor, including the Distinguished Flying Cross, which is awarded to those who committed acts of heroism or achievement while participating in aerial flight.

Times were different then: even with the honor and bravery he showed, when Heywood returned from Vietnam, he had to make sure to not wear his uniform off base or he would get heckled by civilians.

Eventually, Heywood returned home to his wife, Corinne. The pair met through Corinne’s brother and although they had connected early on, it wasn’t until she was a freshman and he was a senior at ASU that the two started dating. After college, the pair were married and then transferred to different bases around the U.S.

Their love stood the test of time, as the pair have been together for 63 years – 40 of those in Arcadia. They have 12 children, 15 grandchildren and six great-grandchildren.

Heywood retired from the military after 29 years and 124 missions. Afterward, he received devastating news: because of the chemical Agent Orange that was sprayed over the foliage where he and his squadron were stationed, Heywood developed an aggressive form of cancer.

At publication time, he was being hospitalized and waiting to start chemo treatments, but told doctors that he has no regrets, has done everything he wanted to do in life, and isn’t afraid to die.

“I have stared down the barrels of weapons trying to kill me. I can face this!” Heywood said.