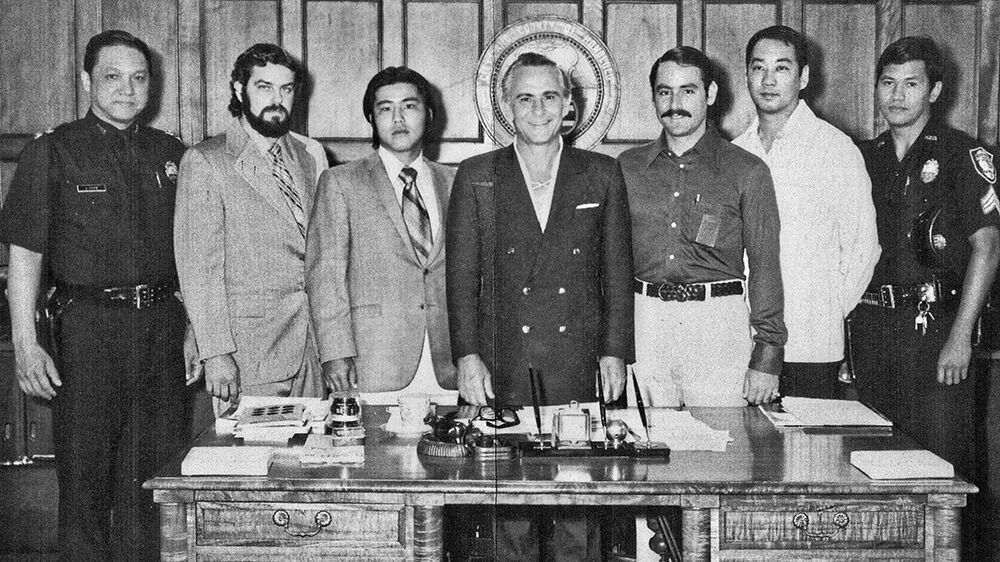 Levitta (fifth from left) and the investigative team with the then-Mayor of Honolulu, Frank Fasi, circa 1974. 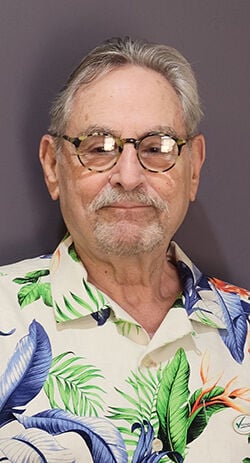 Discovering a new talent during quarantine

Bruce Levitta is an Arizona transplant who grew up on the beaches of southern California and Hawaii. He’s a former police investigator, writer and publisher, and now, he can add one more title to his career list: artist.

Levitta’s life story is, as they say, all over the map.

His boyhood dream was to join the Los Angeles Police Department. He went through the motions – boot camp, exams, etc. and passed everything but the medical assessment. A bad shoulder made him unable to join the force.

Undeterred, he hunted for a job with a police force that would accept him, and he found one in Hawaii. Levitta headed to Honolulu, where he spent nine years as a beat cop and eventually as an investigator.

“A majority of my time was spent investigating cold cases, finding and apprehending fugitives from justice,” Levitta said, “just like in the movies!”

After some time, he decided to take a sabbatical and moved to Texas in 1975.

He dabbled for a while in the entertainment industry, national advertising agencies and the stock market. He said he “finagled his way into many places” because he spoke the language – but none of them seemed to fit. His first foray into journalism came from business writing.

While working as a resume writer, he was offered a position at a new office in either Boston, Seattle, or Tempe.

And stuck it did. He worked with several publications, including Tempe Magazine and Arizona Living Magazine.

In 1986, he decided to create his own newspaper called The Best on Bell.

“People were saying Bell Road was going to be the Camelback Road of the North Valley,” Levitta said. “But then, nothing happened to Bell Road. I asked a friend, ‘where are the happenings?’ and he mentioned Camelback, so in 1990, I launched On the Camelback Corridor.”

The publication was written, published and delivered by Levitta himself. It ran for 27 years and ceased publication in 2015.

After that, Levitta switched gears to writing memoirs for people who wanted something for their family members to remember them by. He did that until 2020 when the world came to a halt.

“I thought, ‘what’s next?’ I can’t stand still; I need to produce, I need to do something because I’m going crazy,” Levitta said. “When I was a detective, you had to diagram the scene. I’d stand there looking at it, and it was like, ‘how do I draw this’? I can write, I can interrogate, but I can’t draw.’”

Then one day, Levitta found himself at a craft store looking for a paint-by-numbers canvas when a store employee started talking to him about acrylic art.

The art form piqued his interest, so he rearranged his home office and turned his writing desk into an artist space, complete with over 70 tubes of acrylic paint.

“One day, I just dove in, without any knowledge whatsoever. I hung my paintings until there was no more room,” Levitta said. “That began in June 2020, and today, I’ve sold almost a dozen paintings and will be having an art show in the fall.”

Levitta said he’s going to stick with the abstract genre because “I still can’t draw. Person, place, thing, stick figure, it’s not happening.” He also learned another technique called pour painting, where paint is poured on a canvas and manipulated with silicone. He calls it his second addiction.

“It’s immensely enjoyable, albeit frustrating,” he said. “With abstract, you have an idea of what it will be. With pouring, there’s science and chemistry to it. When you pour the paint and add silicone, hopefully it will collide properly with the right colors. Then, chemistry takes hold, and what you see in the beginning – once it dries – could be different.”

Levitta said that his new hobby came to him serendipitously, without any research.

“It turned out to be a miraculous discovery of oneself. I fully believe if you immerse yourself in something, you get yourself out of yourself,” he said. “At my age, discovering something that I never thought would enter my wheelhouse is phenomenal.”

All those years as a detective should’ve prepared Levitta to find his artistic side – turns out, he just needed some inspiration and a paintbrush.

The upcoming art show will be held at Kiss Me Kate boutique in the Camelback Village Center (5039 N. 44th St.) on October 16.