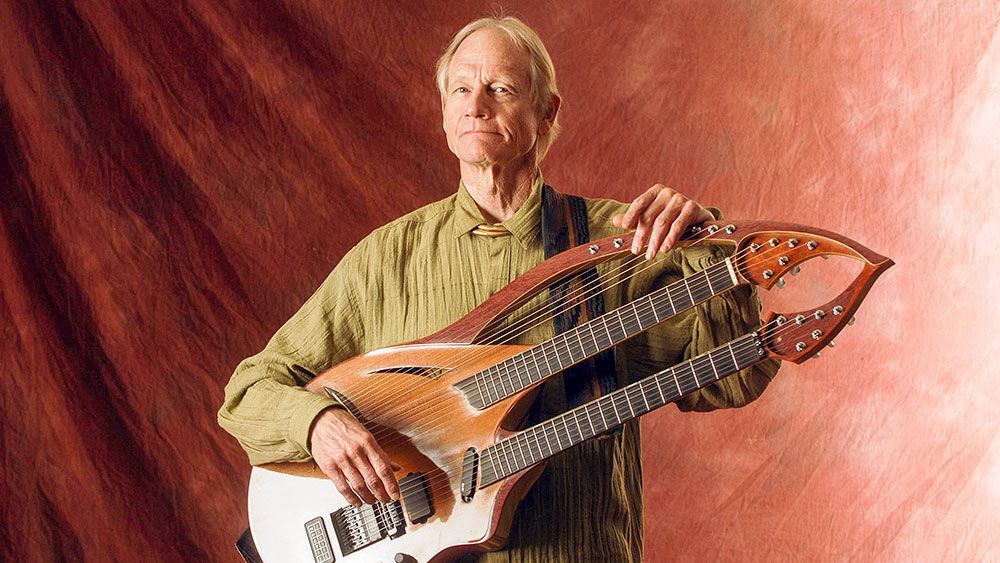 One neck of this instrument connects to solid wood and uses two electro-magnetic pickups to amplify the sound of the strings, while the other neck connects to a hollow cavity to produce a semi-acoustic sound. The synthesizer translates sound elements and applies it to manufactured sounds to make the guitar sound like a piano, banjo, sitar, saxophone or any other instrument or sampled sound selected. The attached strings to the ‘bow’ shape are the harp strings that are plucked or strummed to accompany the sound of the guitar strings. 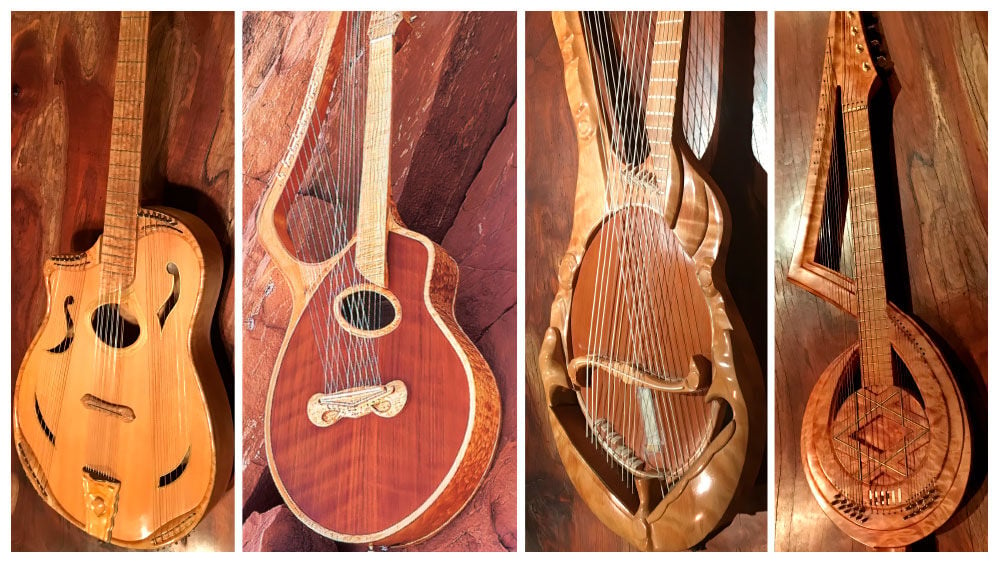 A selection of instruments crafted at Roberto-Venn.

One neck of this instrument connects to solid wood and uses two electro-magnetic pickups to amplify the sound of the strings, while the other neck connects to a hollow cavity to produce a semi-acoustic sound. The synthesizer translates sound elements and applies it to manufactured sounds to make the guitar sound like a piano, banjo, sitar, saxophone or any other instrument or sampled sound selected. The attached strings to the ‘bow’ shape are the harp strings that are plucked or strummed to accompany the sound of the guitar strings.

A selection of instruments crafted at Roberto-Venn.

Did you know that there is a guitar-making school in downtown Phoenix? Neither did I, until Arcadia News did a podcast with Marshall Shore, and he mentioned the Roberto-Venn Luthiery School. I didn’t know what luthiery meant, either, until I enlisted trusty Google to help me out.

That piqued my interest, so I headed down the construction-laden roads to the corner of Fillmore Road and 10th Ave. There, in a non-descriptive brick building on the corner, stands Roberto-Venn. Inside, there are multiple classrooms – though not the regular classrooms you might be thinking of. There are no desks. There are workstations and tools, most of which I’d never seen before. Outside, piles of wood shipped from Nicaragua are stacked against the wall.

It’s here that I met William Eaton; founder, owner, guitar-maker extraordinaire. His name probably sounds familiar if you have experience in the instrument or music world. He’s recorded over 16 albums and played in many musical acts.

The story of how he started at Roberto Venn – and how the school itself started – takes us back to a different time altogether.

John Roberts was an airline mechanic in the U.S. Air Force in the early 1940s. After his service, he worked for Robinson Lumber Company in Nicaragua as an executive pilot. While there, Roberts met a boat builder and decided to build a yacht out of rosewood and mahogany.

Robinson Lumber was cutting in the area where those trees are found – above the stump for the straight grain wood – and would leave the stumps and other pieces that don’t go to the mill laying around. Knowing the pieces were left behind, Roberts enlisted the help of indigenous people in the region and asked them to reclaim the stumps so he could use them to build his boat.

Eaton said Roberts amassed enough wood to fill up his backyard and then found out that the boat builder had left town.

“Now he’s got all this wood, but it was kind of serendipitous when you think about starting a school,” Eaton said.

Roberts and his wife decided to head back to Arizona, so he shipped the wood (with an actual ship and the help of three train cars) from Nicaragua to downtown Phoenix. He tried his hand at an import hardwood business. It didn’t work, so he switched it up and started building guitars.

“Someone said to him, ‘you know, there are a lot of young kids who are getting into crafting,’ so he decided to start a school: Juan Roberto Guitar Works,” Eaton said.

Eaton started playing guitar when he was seven years old. Growing up, he spent time playing with folk groups and rock and roll bands in Nebraska before earning a scholarship to ASU.

“I left all my guitars behind and decided it was time to be a grown-up,” Eaton said. Everyone in his family was in the banking industry, so he thought he should follow suit.

The guitars eventually started calling to him once more, so he searched for the perfect one. Months went by until one day, a knock on the door revealed a gentleman trying to sell the guitar he made at Juan Roberto.

“I thought, ‘wow, this is a cool guitar, maybe I should check this place out,’” Eaton said. “You walk in and see all the parts, smell the rosewood smell, and John Roberts comes out. I told him I wanted to buy a guitar, and he said, ‘well, you should just build your own.’”

A few days later, Eaton enrolled at Juan Roberto. Four months later, he had his guitar. He said that building the instrument felt like meditation because you have to pay such great attention to detail.

Eaton still thought he was destined for business, however, so he headed to Stanford. One of his assignments was to come up with a business plan. Another serendipitous moment: a few days before getting the assignment, Eaton had a dream about building a second guitar and called Roberts to let him know that he would be coming down to Arizona soon. Enter the business plan.

“I had the idea of taking John’s business and turning it into a full-fledged guitar school,” Eaton said.

It was around this time that Roberts took on a partner at Guitar Works. The new guy’s name? Bob Venn, from Bakersfield, California.

Venn’s specialty was electric guitars. He was friends with – and made guitars for – well-known artists like Merle Haggard, Norm Hamlet and Tiny Moore. So, Venn does the electric, Roberts does the acoustic – this is the foundation for Roberto-Venn.

Eaton built his second guitar in three weeks while also putting together the business plan.

“A friend said, ‘when will you ever have the chance to do this again’ and he was right, so I took the chance,” Eaton said.

He sent Roberts and Venn the plan, and they were in. It was 1975 when Roberto-Venn Luthiery became an official school.

Eaton drove his Ford Econoline van from Stanford to Arizona – and the van became his home for almost two years.

“I used that time to experience and explore the desert. I did a lot of hiking. In those days, everything was farm and desert. I was homeless, but I never felt like that,” Eaton said. He used the time to learn everything he could about living with less.

He eventually found his way to Arcadia and the Rancho Joaquina House that was originally built by J.E. Thompson. J.E. was the brother of Boyce Thompson, who built the famous arboretum in Phoenix. (The house is still there – it’s on Cheery Lynn Road in Arcadia). Eaton helped fix the bathhouse and added a recording studio on the property, where he lived for three years. These days, Eaton’s home is in downtown Phoenix.

Eaton, Roberts and Venn completed all permits and accreditations in 1979. Since then, they’ve earned over nine School of Excellence and School of Distinction awards from the Accrediting Commission of Careers, Schools and Colleges.

Students learn how to make acoustic and electric guitars from scratch and, in that, also learn about repairing and auxiliary information, like why guitars are braced a certain way and the geometry of a guitar. There are 10-week and five-month programs available, along with specialty courses like amp design and construction and a fretwork class. Eaton said classes held up to 40 students back in the day, but now there are about 15 people per class.

Director of Training John Reuter was instrumental in revising the curriculum that students learn today. Assistant Director Bart Applewhite “pretty much runs the school,” Eaton said. Applewhite worked with Roberts and graduated from Roberto-Venn in 1993. Steve Davis teaches the electric program, and Jim Prater is on the acoustics.

Graduates from Roberto-Venn work for some of the largest guitar manufacturers – Fender, Taylor, Gibson, Paul Reed Smith – to medium companies like Collings Guitars, to small companies like Santa Cruz Guitars. Graduates have also excelled at becoming custom builders, starting their own guitar companies, or going into management positions.

“We’re probably one or two degrees separated from any guitar that you can find in the world,” Eaton said. “Our goal is to create a new lifestyle for these guys.”

Individuals and groups are welcome to tour the school and attend a Q&A with the instructors. For more information, call 602-243-1179 or visit roberto-venn.com.