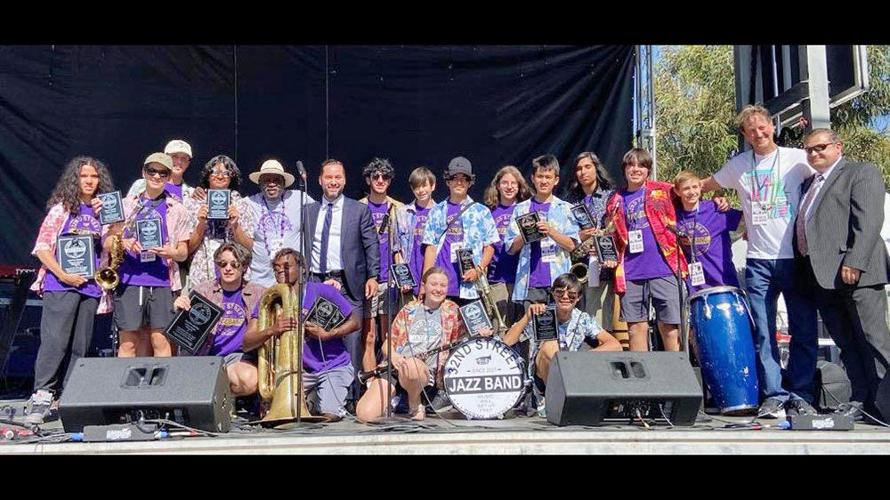 The band with Doc Jones and Miguel Ramirez of Molina Jewelers. They’re holding charter member plaques, a gift from Rowe for their dedication and hard work. 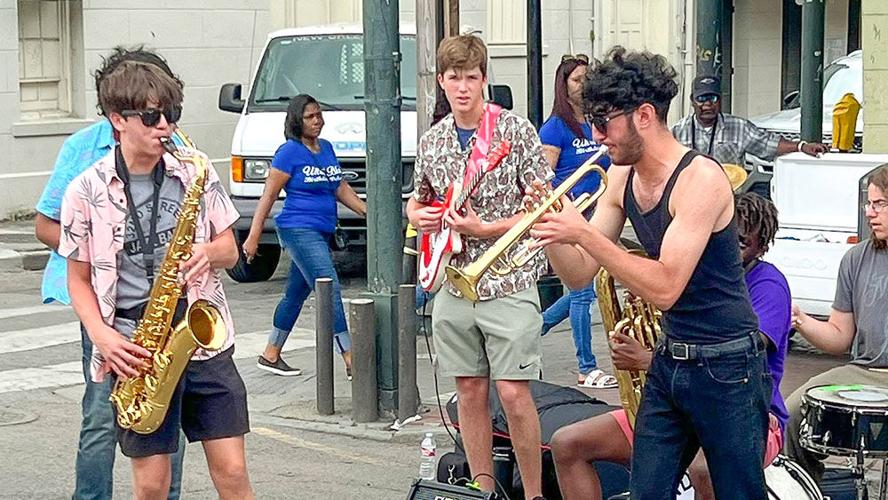 Zac Daitch, Frank Kaplan and Kiahn Tehranchi getting down in Crescent City.

Charlie, Kiahn and Lucas with the Preservation All-Stars.

The band with Doc Jones and Miguel Ramirez of Molina Jewelers. They’re holding charter member plaques, a gift from Rowe for their dedication and hard work.

Zac Daitch, Frank Kaplan and Kiahn Tehranchi getting down in Crescent City.

…then jazz is a city – especially for this group

The French Quarter Festival, held in April in New Orleans, Louisiana, is designed to “remind locals how fabulous and fun the French Quarter can be,” according to Valley music teacher Dave Rowe. Stages are set up at every corner, and cuisine from the city’s restaurants fills booths in Jackson Square. This year, more than 2,000 musicians performed at the festival – and a small group from Phoenix happened to be on that roster.

Rowe began teaching music at Miami High School in 1984. Then, he moved to Phoenix and taught in the Arcadia area for 34 years – he had plans to retire, but he put those on hold and currently works at Biltmore Prep.

A little over a year ago, a group of students approached him to see if he would be interested in starting a music group, which then became the 32nd Street All-Star Jazz Band. Currently, 17 high-school students make up the group.

“I love band instruments and jazz and enjoy teaching the next generation of musicians,” Rowe said. “These motivated students met last fall for two hours a week to practice. They performed at the Phoenix Farmers Market every Saturday morning to prepare for the French Quarter Festival and the Scottsdale Jazz Festival.”

Over 20 stages take over the French Quarter throughout the three-day weekend, starting early in the morning and going through the night. According to Rowe, festival-goers were immersed in multiple genres, including jazz, Latin, Zydeco, New Orleans Funk and rock.

“It was all local New Orleans musical acts. Our guys set up wherever there was space throughout the Quarter and attracted large crowds wherever they went. There was lots of smiling, dancing, and singing at every stop,” Rowe said.

“Being a part of this band has been extremely special to me, let alone being lead trumpet. Going to ‘N’awlins’ was surreal,” senior member Kiahn Tehranchi said.

Rowe has taken jazz bands to the French Quarter Festival since 1984. He said that it is billed as the largest free music festival in the south and attracts hundreds of thousands of people worldwide.

“This small but mighty band from Phoenix made its mark playing on the streets to jazz lovers throughout the weekend. One highlight of our trip was sitting in the front row of Preservation Hall listening to some of the greatest jazz musicians in the world and visiting with the band afterward,” Rowe said.

“Music has always been something that I can turn to when things get tough. The 32nd Street Jazz Band has been no different. The group had a ‘vibe’ like no other when we were in New Orleans, a constant excitement that elevated our playing, which can never again be replicated. It was truly something special,” senior Charlie Nassar said.

The group’s work was far from over, though, for a week after they returned from New Orleans, they headed to the Scottsdale Jazz Festival.

“The big crowd-pleaser is always When the Saints Go Marching In, with a mashup of Mama, Don’t Allow – a rather disrespectful vocal about playing an instrument even if ‘mama don’t allow it,” Rowe said.

Experiencing the “real thing” and playing on a massive stage to a huge crowd was the band’s favorite part of the festivals.

“Heart and soul is the best way to describe what this band presents to their audiences. They are especially supportive of one another and enjoy playing their instruments,” Rowe said. “My favorite part is seeing the older students mentor the younger ones. The collaboration that it takes to be beyond good is evident everywhere we go. I am proud to be associated with these fine young men.”

“We seniors have been anticipating this trip to New Orleans since sixth grade – we all remember when Mr. Rowe would show us videos of marching bands or Preservation Hall, attempting to immerse us in the culture. Getting to be there to play firsthand was genuinely life-changing,” senior Lucas Oland said.

The group will take a break for the summer, but Rowe said they’re still in demand to perform for various organizations. Three senior musicians will no longer be performing as they go off to their post-graduation plans, so there are spots for young musicians in the Arcadia area who would like to join.

“All they need is a basic working knowledge of their instrument and some time to practice. We will train them. They are more than welcome to audition if they have a genuine interest in learning to play some really cool jazz tunes!” Rowe said.

Auditions are simple: play a scale or two of your favorite tune.

In the future, the group will partake in a fall retreat at the Marin Headlands outside San Francisco and continue to perform around Arizona when school starts back up. Those interested can reach out to Dave Rowe at 602-527-6005 with questions.