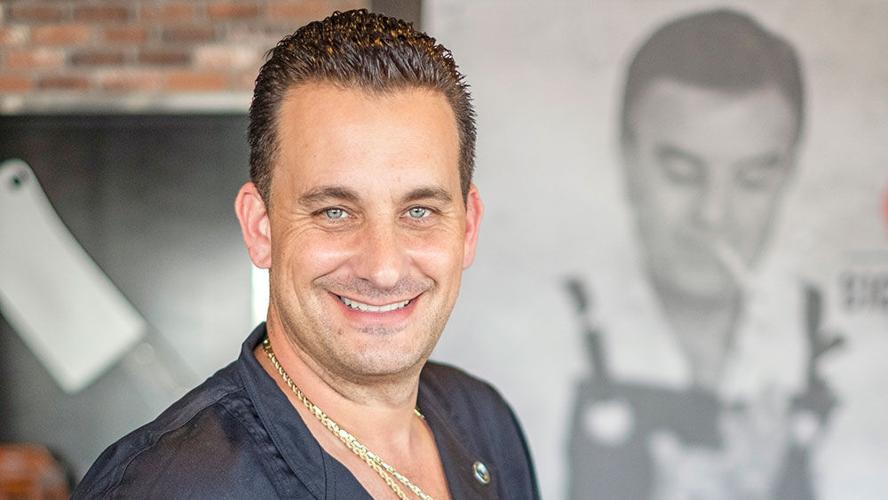 Chef Joey with a photo of his father, Tomaso, in the background. 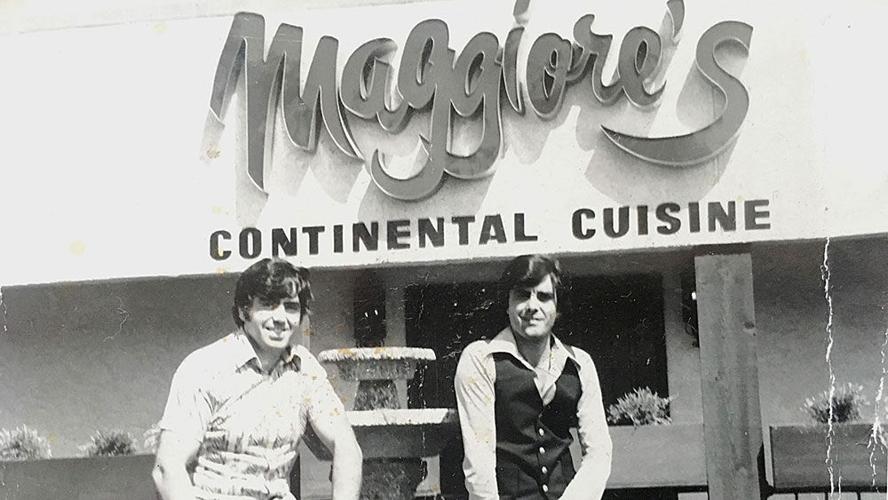 Joey’s Uncle Tino and father Tomaso outside of Maggiore’s.

Chef Joey with a photo of his father, Tomaso, in the background.

Joey’s Uncle Tino and father Tomaso outside of Maggiore’s.

If you’ve ever eaten at Hash Kitchen, Sicilian Butcher or The Mexicano, chances are you’ve seen Chef Joey Maggiore passing through – if not his face, then a flash of the gold chains worn around his neck. As the son of the late Tomaso Maggiore, his family’s legacy has been a staple in Arcadia for over 30 years. Read on to learn how Joey continues to leave his mark on the culinary world.

Your family has been in the industry for decades. Where did your father get his start?

I’m a first-generation New Yorker. My father was from Sicily. He trained with family recipes, watched my grandmother, you know, she was always in the kitchen, and then he went to culinary school in Rome. My grandfather died young, so he had to take care of the family. My Uncle Tino came to America, and then two months later, our family followed. He opened many restaurants before Tomaso’s. He had Maggiore’s in Phoenix and had a few pizza places in New York.

What was it like being the son of Tomaso Maggiore?

Oh man, big shoes to fill! He was a master chef – the guy was amazing. He could light up a room. His personality, his smile, his swagger. Anything he did was bigger than life. I wanted to be him. Kids idolized athletes and rock bands – I wanted to be my dad. The process [of cooking and running a restaurant] was something I lived every day and was excited to watch.

Did you know you always wanted to be a chef?

Well, I didn’t have a choice [laughs]. ‘Normal’ kids were playing with cars. I was playing with knives and tomatoes. It was more that I wanted to be like him – if that meant being a chef, I was going to be a chef. I never thought of anything else. I wanted to own a restaurant and be like my dad, so I just stayed in his footsteps.

Where did you go to culinary school?

I went to Scottsdale Culinary Academy, but I didn’t stay long. It’s funny because I fought my dad and told him that I wanted to go to culinary school. He said, ‘You’re crazy. Come work in the kitchen,’ and by the time I went, I was 18, already working as a line cook. I went with a closed mind thinking, ‘oh, well, this is how WE do it,’ and it just wasn’t the right fit. Six months after I left, I opened my first restaurant.

How did that work out?

It was called Joey’s California Bistro in Coronado. My wife and I were newly-engaged at the time – I couldn’t even be on the liquor license! It was a small little place with fresh pasta and pizza. It did well, but it was very seasonal, and that’s where I got used to the Arizona type of business where you’re packed in the winter. In California, you’re packed in the summer and slow in the winter.

Explain the timeline; you were born in New York…

In junior high, I was in Arizona. My dad wanted to open restaurants in California, so he went to Encinitas and Carlsbad. As a young kid, I was like, ‘I don’t want to go back to Arizona’ [laughs], so my mom and I would travel back and forth. I stayed there for 19 years, but after that, we were like, ‘California is crazy. Let’s move back.’

Did you work your way up in the industry?

I didn’t even make dish pit as my first position. I was 13 and cutting bread – by hand, with a knife – on Friday and Saturday nights. I elevated myself to the dish pit and did that for about six months. That’s why I have so much respect – the dishwasher is the heart and soul of the business!

I got into prep and decided I wanted to be a pastry chef. After about a month, I said, ‘eh, I want a little of this, a little of that,’ so I started working on the line and found my niche in pasta and cooking. By 16, I was running my own station.

What is your official title these days?

I own the Maggiore Group. I’m the president and founder, so I create all of our brands, all of our recipes, and all the cooking. My wife runs the office side of the business.

What is the toughest part of being a restaurant owner?

Nothing about restaurants is easy anymore. Before, I always saw the glamorous side. I saw my father and the excitement. I didn’t know about all the stress that was involved. It’s tough to make money. It’s tough to keep staff. It’s tough to have your dream the way you want it because everyone else’s palate is the one we have to stick by.

From what – or who – do you draw inspiration?

Other chefs, other dishes. You find something you like and think, ‘Oh, that’s awesome. How can I Joey-fy that or make it my way?’ There are a lot of people in the industry that copy others, and that’s fine, whatever, but what makes a great chef or restauranteur is taking what you see and turning it into what makes the dish your own.

In the Valley, there are a TON of chefs that are inspirational – Mark Tarbell, Gio Osso, Beau MacMillan, Chris Bianco; so many people that are so great in their art. It’s not necessarily inspiration in what they’re doing but how they react in the culinary world.

I’ve always been a ‘black sheep’ kind of guy. I started a barbecue chain. I had a high-end steakhouse. I’ve done a little bit of everything – I get bored with one concept. I wanted to tease myself and see how far I could take it, so who knows what’s coming next.

The Mexicano is your latest endeavor. What can people find there?

It’s high-end, regional Mexican food. It’s not your run-of-the-mill stuff. Everything we do has a process, and we created it the same way they would eat it over in Mexico. One of the biggest dishes so far is called the molcajete. The dish comes in a lava rock bowl and has a spicy broth with it – it’s still boiling when it gets to the table, essentially cooking the meat and veggies together. It’s delicious.

To what do you attribute the popularity of Maggiore’s restaurants?

Obviously, living off of my father’s legacy, but also the social media aspect of it – making Instagram-worthy foods, you know? My father used to tell us ‘everyone eats with their eyes in America.’ In Italy, it’s different. You taste it first. So that always sat with me as a young kid. I’d create something and watch it go to the guest. As we build these concepts, it’s ‘how do we get the wow factor, how do we make it bigger than life?’ That’s what we’re doing.

You were on television at one point. What was that like?

In 2010, Food Network approached us about doing a reality show about opening up a restaurant. My sister, wife, father and myself were filmed opening our restaurant, the chaos and what it takes – it’s funny because I always thought reality TV was scripted, but this really wasn’t. We’d just opened, there were cameras everywhere, we were trying to get food tickets. It was crazy. It was great.

A couple years ago, we filmed one in Florida that’s about flipping restaurants, kind of like Bar Rescue, but we’d go to different states and fix restaurants. That one might come out soon.

Tell me about your work with Childhelp.

We work with multiple places but do a lot with Childhelp. I have three kids, and when you hear the stories, it’s like, how could you not want to help, you know? I had a great childhood growing up, and you want that for everybody.

The fundraising dinner that I’m part of with Sherriff Paul Penzone – he’s going to be the server and wine steward [laughs] – but we’re going to really bring it.

[Ed. note: One of the 2022 Childhelp’s Wings Fashion Show fundraiser prizes featured a private dinner cooked by Chef Joey – it raised $30,000 for the organization!]

What does a day in the life of Chef Joey look like?

5:30 a.m., I’m out of the house. I usually start at the office, and by 11 a.m., I’ve hopefully hit all of the restaurants that we have in the Valley. From 6-7 is my creative time. I’ll go to the office or to a restaurant, have a cup of coffee, no one bothers me, the phone’s not going crazy. I take a little time to create and enjoy the business. Throughout the day, it’s whatever fires need to be put out, teaching, creating – I’m all over the place. My happy time is in the kitchen, though.

What do you do to relax?

If we’re not at one of our restaurants, we’re at someone else’s restaurant! We’re always entertaining, out having fun – my kids love this, my wife loves it. We’re not those people who take a vacation and sit by the pool – we’re always running around.

How old are your kids?

Giuliana is 21, Tomaso is 19, Melina is 16. Giuliana wants to be a psychologist – I think she thinks we need help [laughs]. Lately, she tells me, ‘I think I want to run a restaurant,’ which is funny because when you’re brought up in this industry – it’s not a job. It’s a home.

What is one thing a kitchen must have in order to be successful?

Know what your vision is. A lot of restaurants have menus that are all over the place – how do you conduct that in a kitchen? Know your vision and do it right.

What’s next for Chef Joey?

We have three new concepts we’re launching this year. Going big with Mexicano and Sicilian Butcher – multi-states, eight more Hash Kitchens. Growing our brands and creating new ones. I love creating – the hell with running them. I want to create them [laughs]!