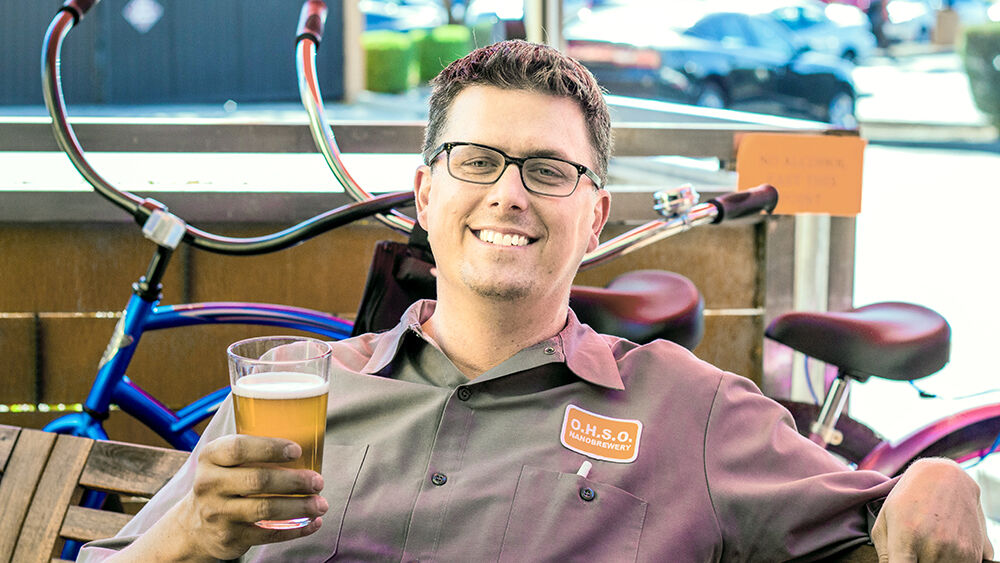 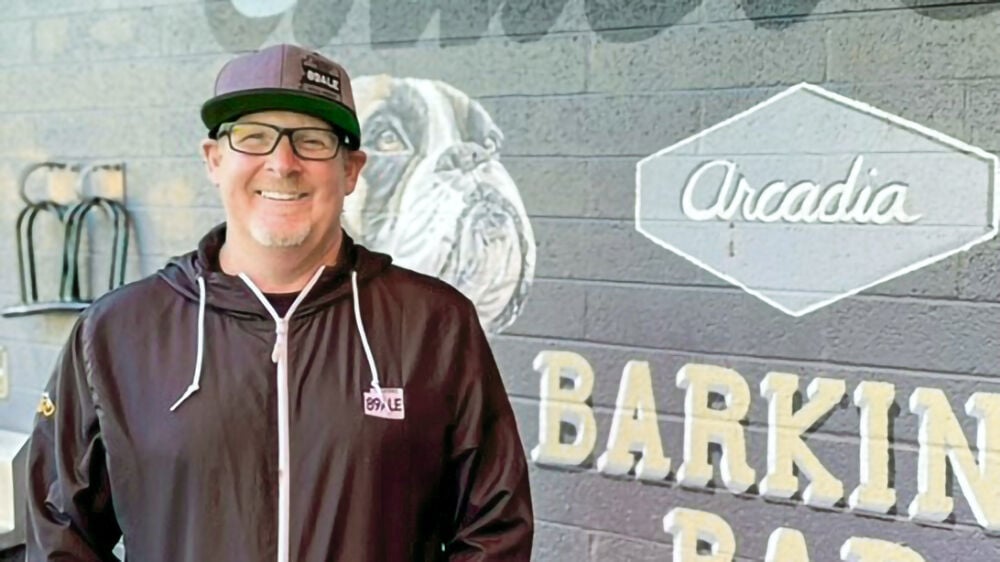 O.H.S.O. is well-known in Arcadia as a gathering place for locals, tourists, family and friends – a staple where folks can enjoy comfort food, house-made brews and good company, which is precisely what Owner Jon Lane had in mind when he opened the first location over ten years ago.

How did you get into the restaurant business?

I was a latchkey kid. I grew up in this business. My mom worked at a bank, and next door was a bar – that I still frequent when I’m home – called the U & I Lounge. It’s a little dive bar/neighborhood pub. My dad owned a banquet facility. I’ve done a lot of different jobs, but I always came back to the restaurant.

Where are you from?

I grew up in Traverse City, Michigan. I moved to Arizona in 1990, and I drifted around a little bit. I’ve lived all over the place. But I’ve moved to Arizona like five or six times – I keep coming back. I wanted to live in California when I was younger, but a broke high school kid doesn’t do well anywhere, and especially there. Rent was too much, and I had a buddy that lived in Arizona, so I rented a room for half what I was paying in CA.

I went to ASU and double majored in philosophy and small business.

Did you see yourself owning a restaurant?

I thought I’d own a neighborhood pub – I love that vibe. The Arcadia O.H.S.O. was smaller when we first opened; there were no front or back patios. It just evolved. I knew this was what I wanted to do, but I didn’t know to what end. This neighborhood took on to us, and we had some opportunities, so I was like, “let’s do it.”

What are your responsibilities?

It depends on what hat I’m wearing that day. In general, it’s to take care of my team and neighbors.

There’s fiscal and mental responsibility, making sure that everyone is okay and the customers are okay. If there’s a wrong, we have to make sure to right that wrong. We’re not the fanciest or divey-est place – we’re a comfortable spot for everyone.

I’ve done everything. Dishwasher, cook [I’m a terrible cook, it turns out] bussed, waited, bartended, managed, general-managed, ran a group of restaurants. I can also brew beer, but now Bret would look at me and go, “yeah, good luck, buddy.” [laughs]

Do you have a hand in creating new dishes?

We don’t change our menu a ton – maybe once a year. We started with an eclectic menu, but it became too tough to execute, so we went toward more comfort food items. We added mac and cheeses, more burgers – things we were already making – and expanded on those. We used to have tacos we made individually, but it was killing our lines, so now we make a decomposed taco that the guest builds. If the kitchen staff said tomorrow that they wanted to do a tomahawk steak, I would say, “show me how that will work.” That’s my influence.

What’s the most challenging part of being an owner?

Having been an employee and now the employer, I think one of the biggest things is understanding where your team is at. The hours sometimes aren’t great; we work holidays. If your team is with you, it makes the job easier. And we’ve built such a great team over the years. They know how to handle stuff.

Meeting people and making connections with staff members, locals, non-locals, regulars. It’s fun to hear people’s stories. Because we’re a brewery, there’s a whole different aspect, and I get to meet brewers from all over the country. Honestly, it comes back to my team. I’ve known some of the people who have worked for me for 20+ years. We have five of the original employees from 10 years ago, which is rare. The people are my favorite part.

Advice to those who want to be part of this industry?

Have fun, have thick skin and buy better shoes! Come outside of your comfort zone and get to know people. Regulars lead to friends, and friends lead to long-term relationships. We’re not just in the restaurant business; we’re in the people business. I like to pick out something that someone is wearing and see if I can start a conversation about it – it’s awesome to create a connection.

As an owner, expect to spend more, have less time and get extremely frustrated. Stay positive, get to know people and be good to them. You’re going to learn a ton, you’re probably going to struggle, but ultimately, if you take care of your team and your customers, you’ll be successful.

locations are there now?

This is the first one; we opened in November 2011. We looked at several properties – where The Yard is on 7th St. and where The Yard is in Tempe. We were looking for funky spaces buried in neighborhoods – that had that neighborhood vibe, you know? We knew the owner of this building wasn’t doing all that well, so we approached the owners of the German Sausage Company [next door to O.H.S.O.] who own the building, and they let us move in!

[TO BRET] Where did you grow up?

I’m a California kid. I sold my company in California in 2002 and bummed around for a couple of years. I spent some time in Utah and moved to Arizona (from the Bay Area) in 2005. My sister moved out here, and we came to visit in November. We started packing as soon as we got back.

How did you get into brewing?

I started as a homebrewer. When we moved here, we lived in Gilbert – which at the time was an island. There was nothing out there. We had to take two dirt roads to get to Four Peaks, which was the only thing open then.

I built a full brewery at my house with a bocce ball court and pizza oven. I had a huge backyard, so we created a bar there. I brewed beer and gave it all away. Every weekend, 40-60 people would come by, we’d watch sports, and I got to a point where eight taps were going at my house at any time. I learned from other homebrewers who are now head brewers around town.

In 2016, some brewers were shifted around town, so there was an opening at The Perch Brewery in Chandler. I got a call on Friday from a friend of mine, who was the general manager there, and he said, “Hey, do you want a job?” And my first thought was, “No,” and my wife yelled, “Yes, he does!” [laughs] So, I interviewed and then started that next week.

Lots of good days, bad days and early mornings because the brewery there was double the size of O.H.S.O.’s. I was there for two years, and then the Gilbert and Arcadia O.H.S.O.’s were opening – I talked with Jon for 10 minutes and started brewing the next day.

How many beers have you created?

Probably in the thousands. I’ve been brewing three to four beers weekly for over ten years, and almost every beer is different. I’ve found that catchy beer names sell a beer as quickly as how good the drink is – I want to say 25% of my job is marketing.

What’s a unique ingredient you’ve used in one of your beers?

We make a beer that tastes like peanut brittle, using lactose, honey and honey roasted peanuts. We also make one called R2 Tea2, that’s a single-hop IPA – in the last five minutes of the boil, we throw in a pound of acai berry white tea. It’s a little hazy, fruity, and a different spin on beer. It’s so popular that it’s gone two days after announcing it. We also do a bacon beer and an Elvis beer with peanut butter, bacon and banana – and there’s a doughnut to go with it!

[TO JON] Tell us about your new venture next door.

Little O’s will have a retail area, coffee and doughnuts in the morning [insider tip: there will be a cookie monster and maple bacon doughnut!], and a drive-thru line. In the afternoon, guests can come and stay or come and go – there will be premade salads and sides, pastries and stuff like that. Or you can sit down and get full service.

As we get back to “normal,” people are getting busier, so we wanted to provide a “go” or “stay” option.

Before we open, we plan to test the doughnuts on some of the local schools to make sure we’re doing them right [laughs].

Is there an official opening date?

Not yet. We’re going to open in phases, starting with morning service. Staffing is a struggle, and we’re still waiting on some of our equipment – we ordered in June and July, and stuff still isn’t here! I’ll say we’ll open sometime in January.