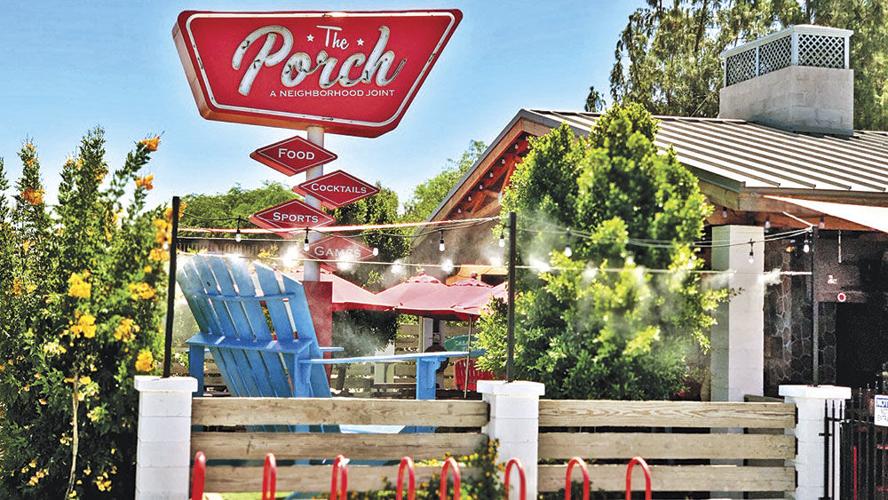 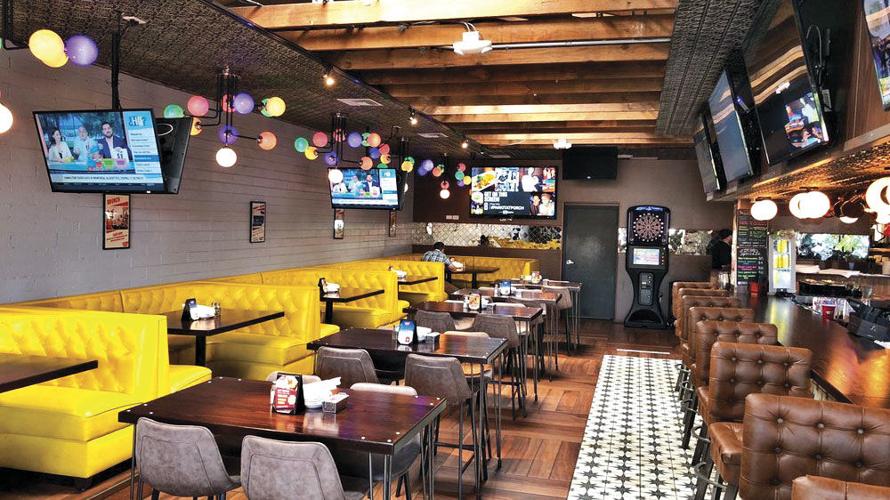 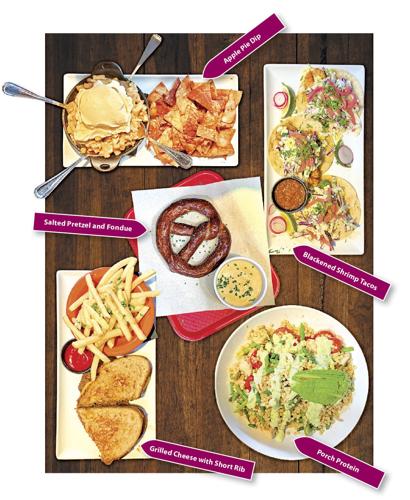 My first thought upon walking into The Porch, Arcadia’s own gastropub situated near the corner of 40th St. and Indian School Road, was “There are games here!”

The Porch has become a local favorite for late-nighters, weekenders and weekday lunch crews. What used to be known as the Shanghai Chinese restaurant has now become a modern, yet vintage-style pub.

As my colleagues and I sat down for lunch, my eyes immediately found the pinball machine, Skee-Ball and basketball hoop in the corner. I also noticed the Connect-Four and giant Jenga game outside on the patio – along with an enormous Adirondack chair fit for a giant.

The interior reminded me of a 1970s living room: multicolored bulbs, bright yellow booths and eclectic tile on the ceiling and in the bar area. The patio has plenty of seating – two of the tables had swinging benches for chairs, which is where I would’ve been had it not been scorching outside at 11 a.m.

If you’re looking for classic “bar-food” appetizers, The Porch has all the chicken wings, nachos and fried pickles to keep you satisfied until football season is back on TV. My crew decided on the salted pretzel with fondue. I think we were all wishing we had been at a baseball game after our first bite – chewy, just enough salt so that our taste buds didn’t burn off and a rich, creamy beer cheese for dipping.

Our server stated the most popular dish was the grilled cheese with short rib. She said it’s “the unicorn of the menu,” which we took to mean magical and something you don’t see every day – and we were right.

With smoky cheddar and American cheese, zesty house-made barbecue sauce and crisp dill pickles, each crunch of the toast mixed with the melty cheese was…bewitching. We ordered two because no one wanted to share. For the sides: parmesan truffle and thinly-sliced, lightly-peppered crinkle cut sweet potato fries. The table favored the sweet potato fries as we all thought the full-punch flavor of parmesan and truffle sauce was in need of a “tell me when” scenario.

We ordered blackened shrimp tacos, heaped with cabbage, pickled red onion (which gave it a subtle kick), radish and cilantro queso fresca. I might be biased because I love seafood, but the smoky shrimp was the best part – it felt like the cabbage and onion slaw was trying to steal the show.

I was relieved when my table ordered the Porch Protein Plate – I have a problem when it comes to ordering the healthy stuff in that… I don’t order it. Grilled chicken, couscous, avocado, tomatoes and asparagus with a Greek yogurt sauce – I was surprised that the tenderness of the couscous, the crunch of the veggies and the creaminess of the sauce came together so well that I actually didn’t mind trying it. Plus, there’s always dessert, which came in the form of an apple pie dip.

Served in a cast-iron dish, the deconstructed apple pie is diced into bite-size pieces and then covered with a massive scoop of vanilla ice cream and served with cinnamon dusted pie crust chips on the side.

They also have a huge nighttime following, especially when the weather calls for more hanging out on The Porch!