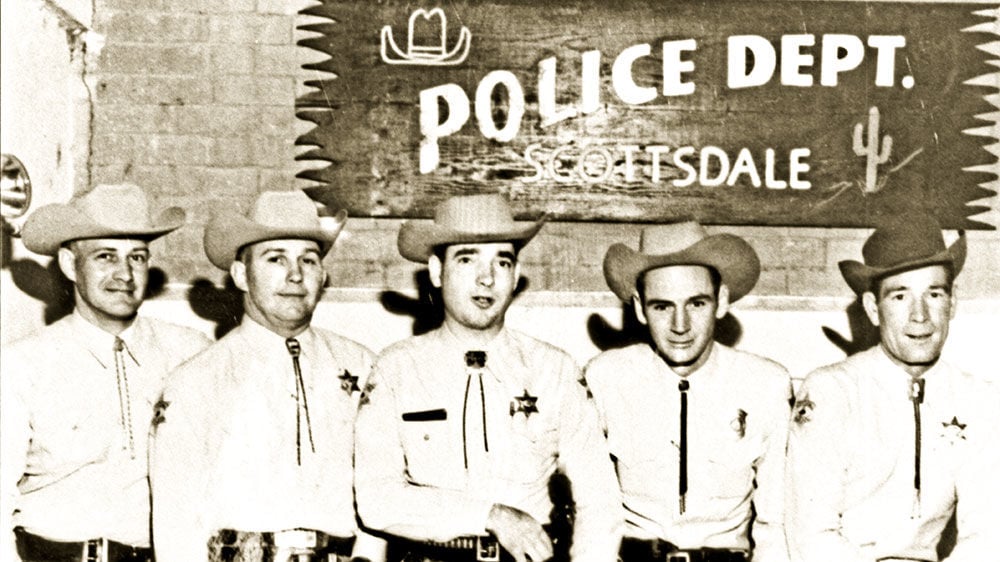 Deputies Bog Zeider, Dick Seidner, Frank Beck, Kenneth Pepper, and Marshal Henry “Red” Cooper (2nd Scottsdale Marshal), at the Scottsdale Marshal’s Office on the steps of the Little Red Schoolhouse, circa 1957.  Each Marshal was allowed to establish their own uniform or badge style. Red Cooper decided to go with the western 6-pointed star that the Scottsdale Police still uses today. 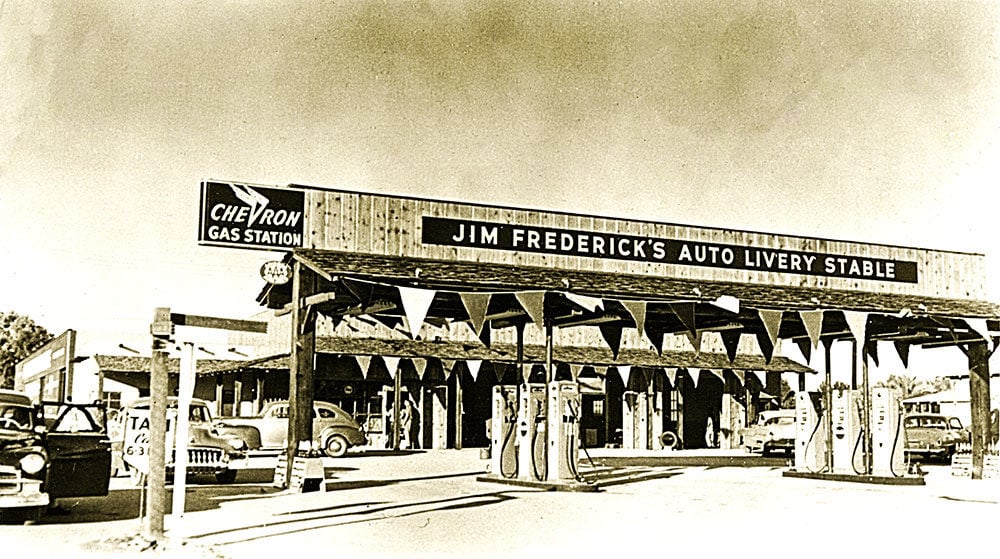 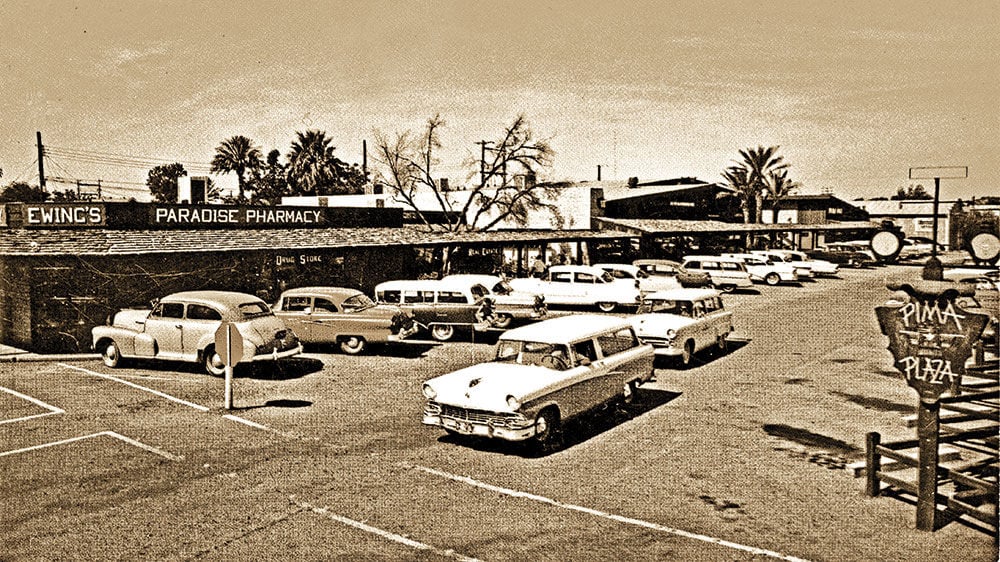 Paradise Pharmacy was the location where President Roosevelt’s son Elliott was arrested for DUI in 1959 by Scottsdale Marshal’s Deputy Ken Pepper. 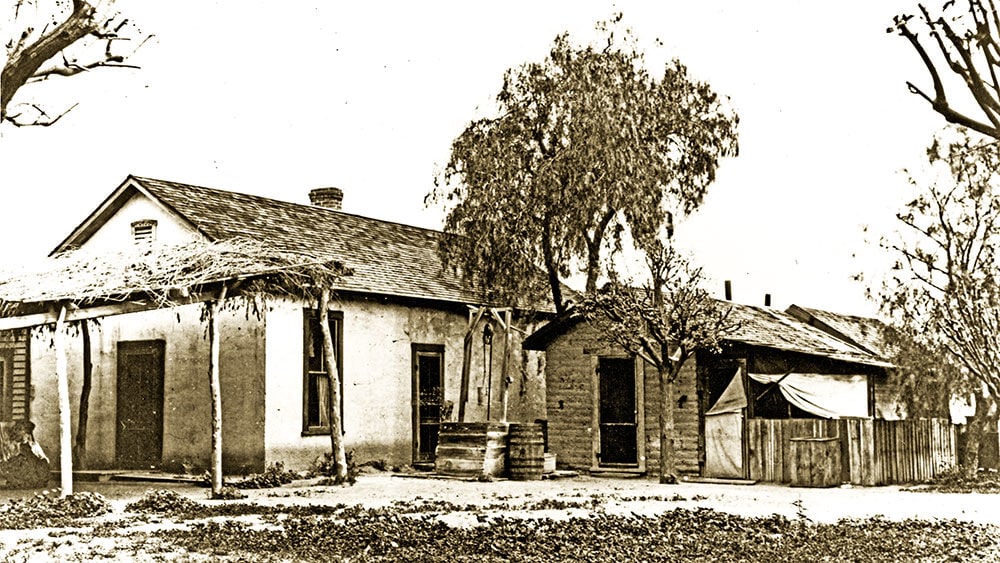 Winfield and Helen Scott’s home at Indian School and Scottsdale, circa 1895, where the shootings of Amos Nigh and Peter Johnson happened.

Deputies Bog Zeider, Dick Seidner, Frank Beck, Kenneth Pepper, and Marshal Henry “Red” Cooper (2nd Scottsdale Marshal), at the Scottsdale Marshal’s Office on the steps of the Little Red Schoolhouse, circa 1957.  Each Marshal was allowed to establish their own uniform or badge style. Red Cooper decided to go with the western 6-pointed star that the Scottsdale Police still uses today.

Paradise Pharmacy was the location where President Roosevelt’s son Elliott was arrested for DUI in 1959 by Scottsdale Marshal’s Deputy Ken Pepper.

Winfield and Helen Scott’s home at Indian School and Scottsdale, circa 1895, where the shootings of Amos Nigh and Peter Johnson happened.

Scottsdale resident and Citizen Adviser Bruce Wall has ample knowledge of Scottsdale’s notorious crimes. His interest in this part of the city’s history led him to create a presentation called “Scoundrels, Rascals and Cutthroats and the Scottsdale Lawmen Who Caught Them.” It was presented at the Mustang Library.

Wall believes people have a general interest in hearing about law and order in the United States, especially in the West.

Initially, Wall thought he’d be happy if ten people showed up to the presentation. “But then 70 were at a showing,” Wall said. “Eventually, we had a little over 100 people.”

In the presentation, he recapped five of the most famous criminal activity stories in Scottsdale’s past.

To start, Wall spoke about the first homicide in Scottsdale in 1901. The guilty party was a local mailman nicknamed Popcorn John (last name Rubenstein), who would sell popcorn on the weekends to make a little extra money.

Popcorn John (also known as Crazy John to the locals) decided to shoot and kill a couple of Winfield Scott’s farmhands, Amos Nigh and Peter Johnson, after a situation arose with the farmhands’ horse and wagon. His defense was that the pair were interfering with the delivery of the U.S. Mail. Popcorn John was found guilty and sentenced to life in prison at the Yuma Territorial Prison.

“It is so iconic because so many of the founding members of Scottsdale were involved, including the man who founded the first general store in Scottsdale, J.L. Davis, who went in pursuit of the murderer,” Wall said.

Next up, Wall discussed a double homicide in 1954. Town Councilman Vernon Don “Jim” Fredrick was shot in his home after a night out with friends.

There are multiple theories as to the reason behind the shooting. Fredrick’s neighbor, Bill Demand, thought that his wife Faye and Vernon were having an affair. Bill decided to shoot Vernon. Faye died shortly after in an accident when her car careened into the Arizona Canal. Bill was accused of murdering Vernon, but the case was never solved. No one figured out what happened to Faye or how she ended up drowning in the canal.

“If this had been today, it would have been a national front-page news story,” Wall said.

The third case happened in 1959 and involved a DUI. Deputies Ken Pepper and Clyde Church were called to check on a suspicious vehicle. They found a drunk gentleman passed out in a car, but hesitated to arrest him, even though he was inebriated, because he was Elliott Roosevelt – the son of former President Franklin D. Roosevelt. Despite having a blood alcohol content that by today’s standards would be considered very extreme, he was acquitted of all charges.

Wall explained that it’s a compelling case to look at because of how different the result would have been in the modern-day.

The fourth case is, in Wall’s opinion, the most famous case in Scottsdale history: the unsolved murder of Bob Crane. Crane was a 1960’s TV actor known for the television series Hogan’s Heroes. In 1978, he was participating in a local theater production at the Windmill Theater in Scottsdale.

After the play, he signed autographs, and then he and a friend went to Bob’s car and saw his tires had been slashed. They took it to a gas station to get fixed and headed out to get coffee. That was the last time anyone saw Bob alive. He was discovered the next day by his costar, Victoria Berry, with trauma to his head and a cord around his neck.

Wall explained that multiple factors botched this case, such as detectives forgetting to set up a perimeter and giving tours of the crime scene. There are numerous theories about what happened, but the case is still unsolved. According to Wall, a majority of the evidence was corrupted and DNA testing would not be possible, even today.

The last case is from 1981. Nicknamed “Sleepwalking Through Murder,” the case revolves around a woman named Elana Steinberg, who was stabbed 26 times by her husband, Steven. Steven had called the police and told them that two men had broken into their home. Before police showed up, however, he invited family and friends over to give them tours of the crime scene. He eventually confessed to the murder, but the defense lawyer argued that Steven Steinberg was in a dissociative state and that he was sleepwalking at the time.

The lawyer claimed that he was not responsible for the murder. The jury agreed – and Steven was found not guilty. Six months after the case, the legislature changed a law that sleepwalking could not be used as an insanity defense in Arizona.

“I love to see the audience react once they learn all the people in the story and how many cases have parallels to today,” Wall said. “I also love including the ‘planned tangents’ when I talk about some aspect of Scottsdale or Arizona history that most people don’t know. It fills the gaps in the story and makes history relevant.”

Check out the full presentation on the Scottsdale Arizona YouTube page: