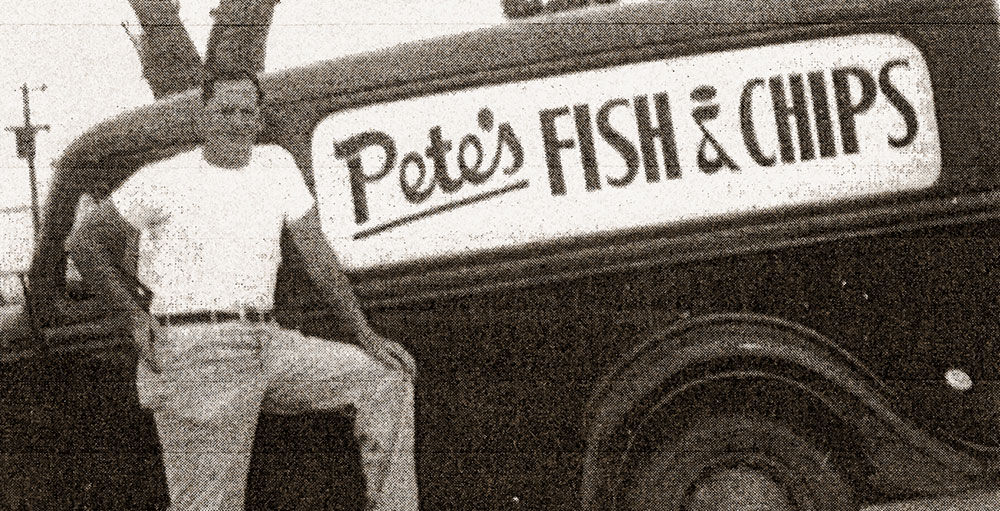 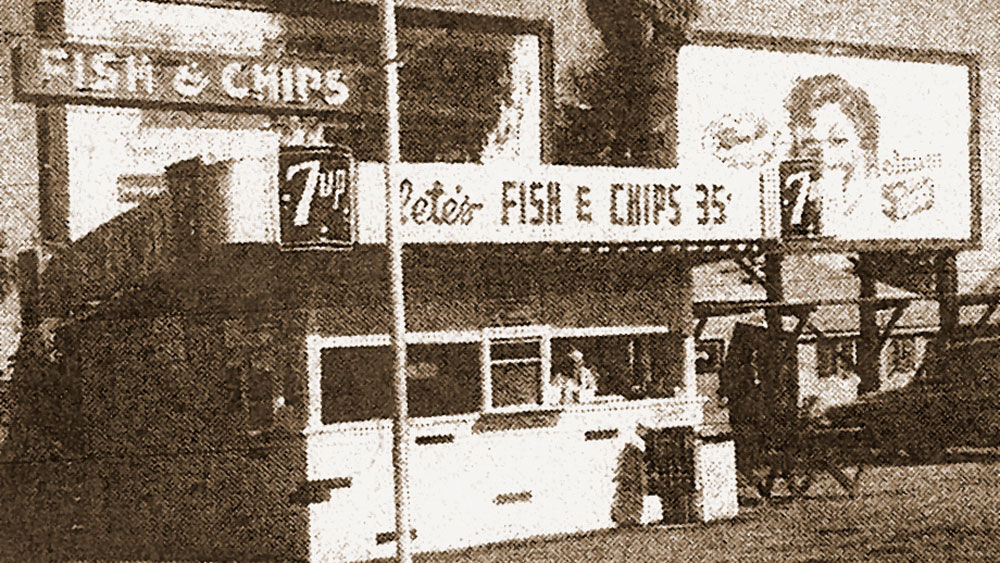 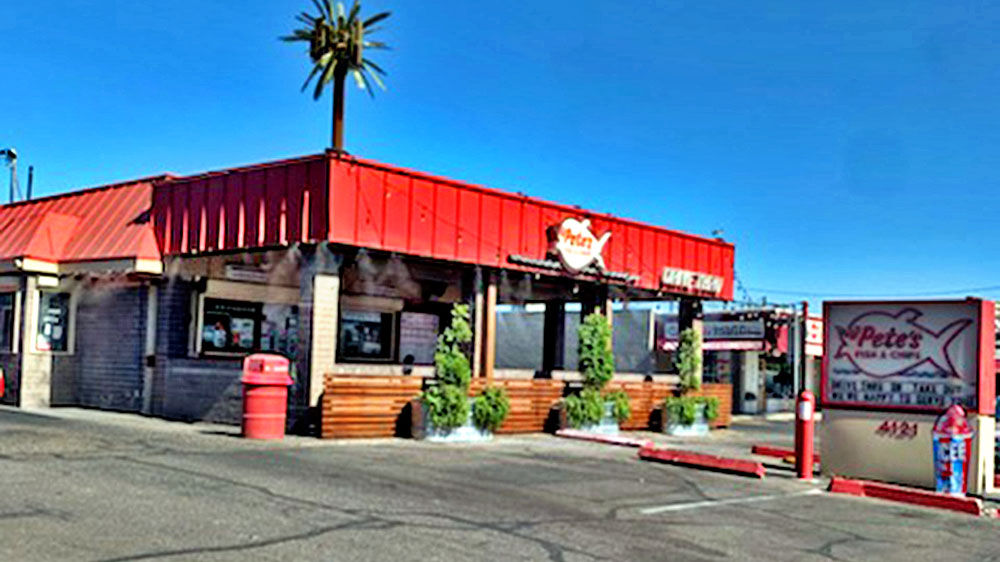 The current Pete’s in Arcadia.

The recently-unveiled mural was created as a nod to Arcadia for its continued support. Northbound travelers on 44th St. will see it on the right.

The current Pete’s in Arcadia.

Known for its deep-fried food, Pete’s has satisfied the cravings of locals and visitors across the Valley for 73 years. It was founded by Indianapolis native Peter Grant Jr., a World War II PT boat skipper, NBA basketball player and international golf champion, not to mention a big fan of English-style fish ‘n’ chips.

When Grant Jr. contracted malaria, dysentery and rheumatic fever in 1946, he was discharged from the military and told to move to a hot, dry climate like Egypt or Arizona. Citing his inability to speak Egyptian, he chose the Grand Canyon State and never looked back.

Grant Jr. and his pregnant wife Ruth packed up their life in the Midwest and headed south on Christmas Day 1946, with him anticipating a job as a schoolteacher. He took a different turn instead, feeling inspired by all the fish shops he visited in Europe. Deciding to test his luck by opening up a shop of his own, he started a Pete’s Fish & Chips food truck, with the initial location on Van Buren Street. Although he pocketed a $12 profit on his first day, business quickly picked up.

Before long, Grant Jr. had established eight additional locations, including one on Mesa’s Main Street and another on North 44th St. and Indian School Road in Arcadia. The original 44th St. Pete’s Fish & Chips was built in 1959, located between a gas station and the Milk Depot on Indian School. They moved across 44th St. and opened the current location in 1967.

Pete’s Fish & Chips was wildly successful, even after Grant Jr.’s tragic death in December 1987. A thief fatally shot Grant Jr., stealing his $30,000-coin collection. A Scottsdale coin dealer had read about it in a national trade magazine and called the police when someone tried to sell him Pete’s Fish & Chips commemorative coins. The thief, James D. Karis, was arrested, found guilty of first-degree murder and sentenced to life in prison. Grant Jr.’s daughters Kathy Adams and Pat Foster took over the family business in their father’s honor.

Pete’s Fish & Chips has remained a steadfast neighborhood tradition, with few changes other than the construction of newer buildings with drive-thrus. Foster couldn’t be prouder of her family and the restaurant’s legacy. “As for our food, we have changed very little, because our customers seem to like what we are serving,” Foster said.

As owners, Foster and Adams’ commitment to quality service and communication has helped the business overcome the challenging start of the year, and according to them, Pete’s Fish & Chips is doing fine, thanks to loyal customers.

“Pete’s was well-positioned during the pandemic because we have offered drive-thru and take out service since 1947. We closed off our dining tables on the patios until it was safe to open some of them back up, keeping social distancing in mind,” Foster said. “We continue to follow the CDC and Maricopa County Health Department regulations, and we look forward to life getting back to normal.”

The support of Arcadians is nothing new to the business. “The Arcadia community is part of our Pete’s family,” Foster said. “Our dad raised all four daughters in Arcadia, and we attended Ingleside and Arcadia growing up. Ours is truly a family business, and although we have eight locations throughout the Valley, our location in Arcadia is very special.”

Foster lives in Arcadia as do two of her children and three of her grandchildren, while Adams’ son Kyle manages the 44th St. location. He recently updated the mural on the wall near the business, giving a nod to the Arcadia community for their unwavering support. Adams has made other improvements to the restaurant, including sandblasting old paint from the original block for a more modern look and the addition of decorative lighting, plants and shade screens on the patio for a more enjoyable dining experience.

“We like to think we do a good job of keeping our customers happy. We want them to experience a true family tradition,” Foster said. “We have not expanded past our eight locations like the corporate giants, preferring to concentrate on what we have.” Pete’s is also one of the only eateries that doesn’t accept credit cards. It’s a cash-only establishment.

Pete’s Fish & Chips is ready to keep serving the community for a long time to come, remaining committed to their founder’s saying of “Pete’s serves three things: price, quality and service.”