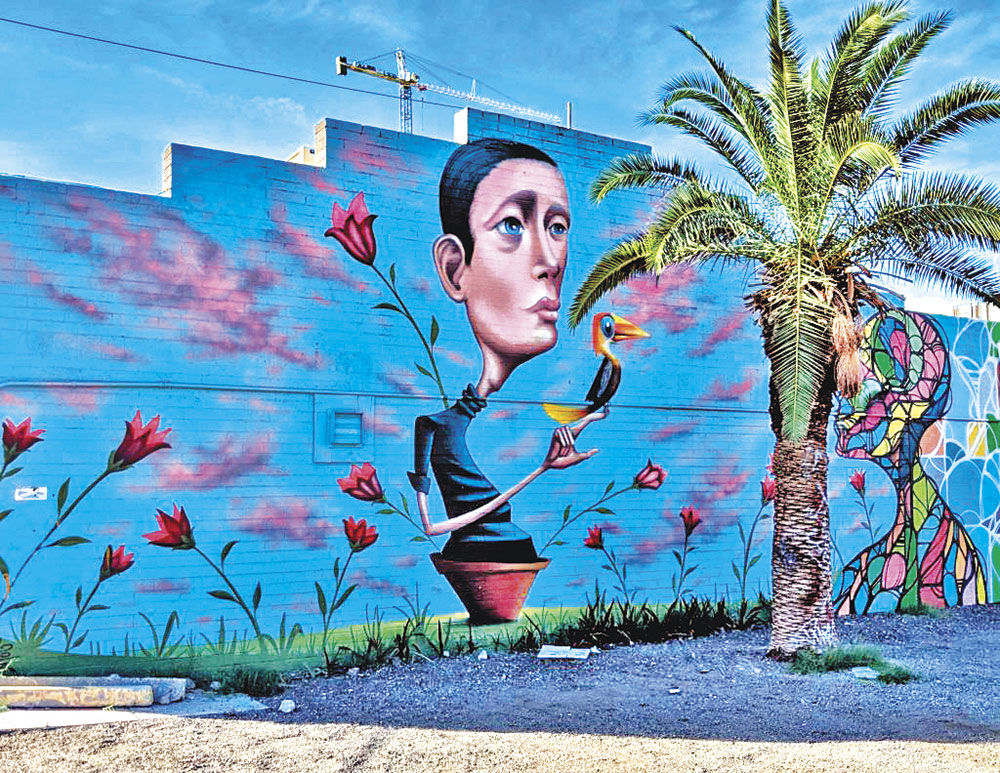 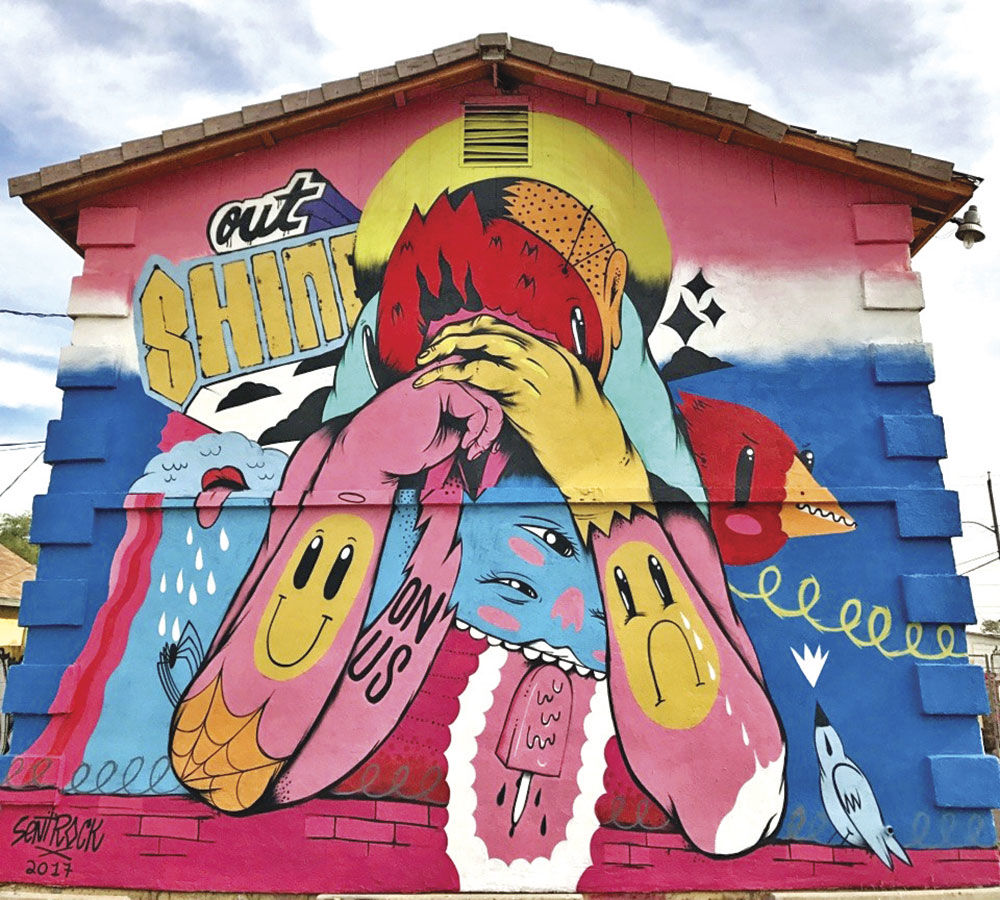 Out Shine Us by Sentrock. 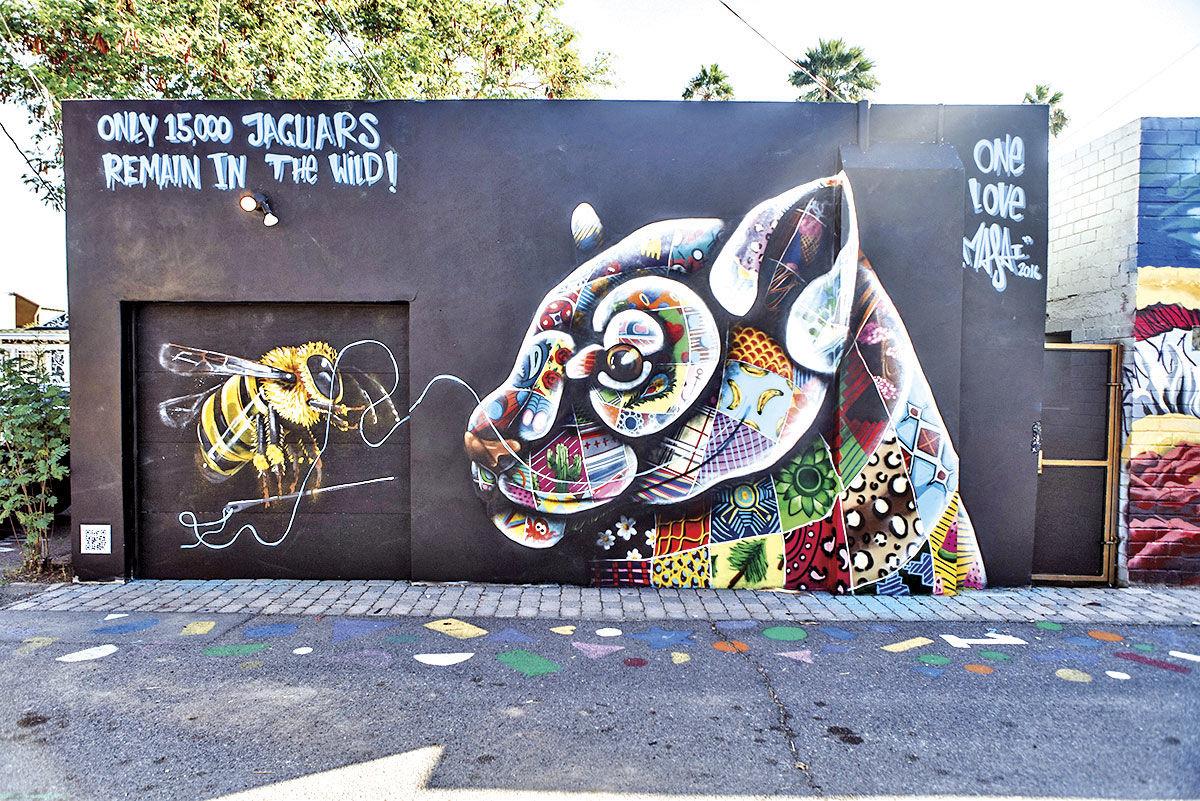 The Art of Beeing by Louis Masai.

The Arctic Circle by Isaac Caruso.

Out Shine Us by Sentrock.

The Art of Beeing by Louis Masai.

In the worn-down alleyways of Phoenix’s urban core near Roosevelt Row are a handful of on-going street art projects meant to enhance the lifestyle and experience of residents, workers and visitors in downtown Phoenix. Below is a listing of some of Phoenix’s more well-known street art and its artists.

Joseph “Sentrock” Perez has become a fixture in the Chicago street art scene over the past few years. The artist is a Phoenix native and paints bold, iconic red birds on building walls throughout the city. Sentrock moved to Chicago to study art and design at Columbia College eight years ago. The masked bird character in all of his paintings is a symbol that represents freedom and the escapism embedded in human nature. For more: sentrock.com.

Caruso traveled all the way to the Arctic Ocean to articulate in his street art the rapidly changing climate and the region’s animals that are becoming endangered because of it. Caruso was one of 29 artists and scientists from around the globe chosen to embark on a two-week trek through the Arctic, part of the 2018 Autumn Expedition of The Arctic Circle Program. For more: isaacncaruso.com.

Many of Caraveo’s colorful murals of delicate people and animals can be found throughout Phoenix (along with his fine art paintings in galleries). One of his latest works is a scene of a man in a pot holding a tropical bird. “The mural symbolizes gentrification, hence the human in the portable plant pot being able to be taken away to another location,” said Caraveo. For more: tatocaraveo.com.

This mural is part of a larger project of Elliott’s called Mobilize Walls, which is a “decentralized network of murals to out scale the proposed U.S. border wall.” His downtown Phoenix installation is “a reflection of the need to dissolve borders in the world and within ourselves to cultivate more porosity and dignity within a divided world,” explained Elliott. He lived in Phoenix for about nine years before moving to Santa Fe, but maintains “deep connections” to the city. For more: mobilizewalls.com.

The Art of Beeing

Scientists have concluded that by the end of 2025, half of all living species on earth will become endangered. This doesn’t sit well with UK-based artist and activist Louis Masai. He went on a global tour called the Art of Beeing to illustrate the extinction crisis by creating public art of some of the planet’s most critically endangered species. This work portrays a jaguar. It’s estimated that there are only about 15,000 jaguars left in the world. For more: louismasai.com.