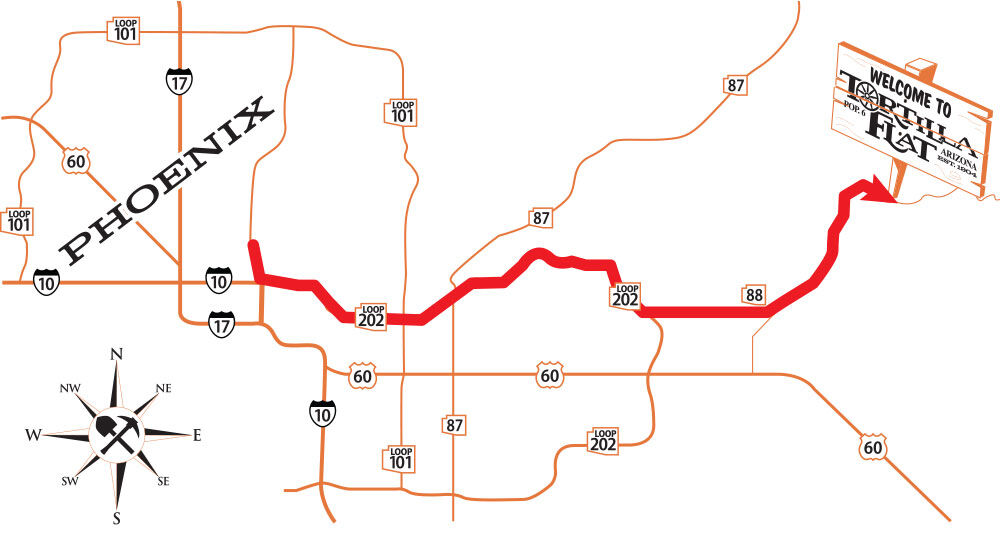 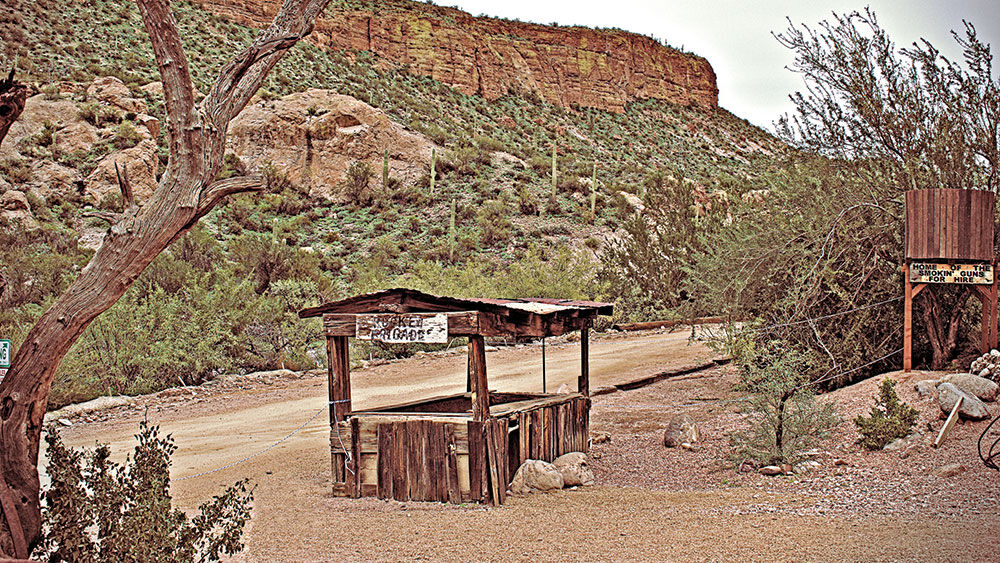 The oldest standing structure on the property, circa 1904. 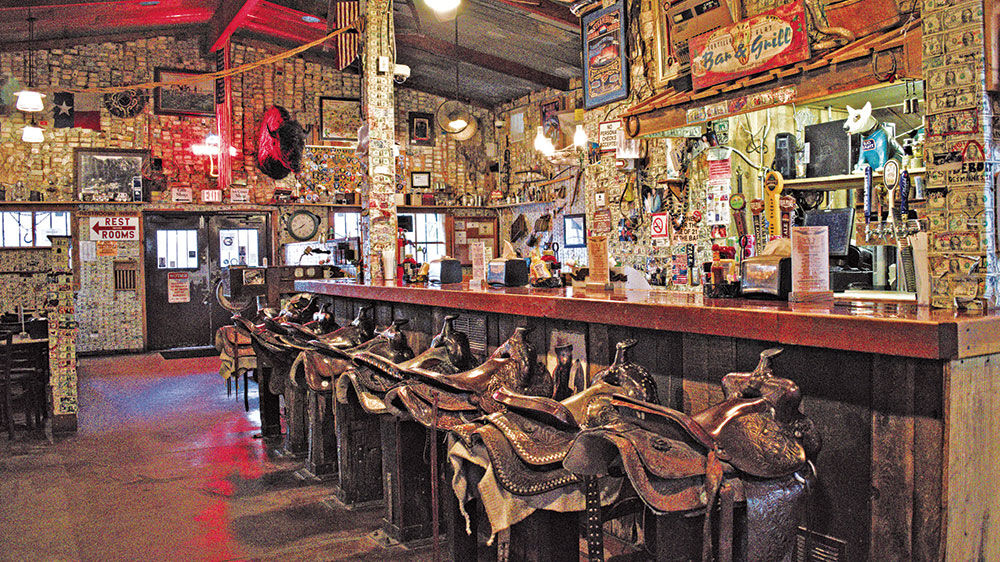 Superstition Restaurant & Saloon features a large selection of popular dishes including the Killer Chili Burger (inset). The Saloon has horse saddle bar stools and the walls are adorned with dollar bills from around the world. For over a century, Tortilla Flat has been a migratory route and camping ground for the Apache tribe, Mexican prospectors, pioneers and cattle ranchers.

Tortilla Flat got its name from a nearby butte that’s shaped like a tortilla.

The oldest standing structure on the property, circa 1904.

Superstition Restaurant & Saloon features a large selection of popular dishes including the Killer Chili Burger (inset). The Saloon has horse saddle bar stools and the walls are adorned with dollar bills from around the world. For over a century, Tortilla Flat has been a migratory route and camping ground for the Apache tribe, Mexican prospectors, pioneers and cattle ranchers.

Tortilla Flat is a historic unincorporated community in a mountain passage near the Salt River in the Superstition Mountains. It’s entangled in the history of Phoenix and many legends of the Old West.

“Tortilla has always been a way station of something,” Chris Field, director of operations for Tortilla Flat, said.

“It’s such a unique property. There’s nothing like it anywhere in Arizona,” Tortilla Flat co-operator and Chris’s fiancé, Katie Ellering said.

Documents indicate that Tortilla Flat came into existence during the Great Depression. However, unofficial stories date it back to the ancient Hohokam, conquistadors in search of golden cities and the Civil War.

Field and Ellering purchased the last remaining stagecoach on the Apache Trail in September 2019. “We want to give the exposure to this place that many people never even knew was here,” Ellering said.

The town is not a replica of what once stood (like many Western-themed towns), but is a true original. “We are a genuinely authentic, historic landmark,” Ellering said.

The Apache Trail road that passes through Tortilla Flat was officially developed to support the construction of the Roosevelt Dam in the early 1900s.

The dam was part of the U.S. Reclamation Act of 1902 and was built to dam the water and end the flood and drought climate in the Salt River area. “This allowed cities like Phoenix and Tempe to develop – and for Arizona to become a leader in farming and crops like cotton and citrus,” Shannon Fleischman, curator at the Arizona Historical Society Museum, said.

The U.S. Forest Service purchased the town around the time the Tonto National Forest was established in 1905.

The Tonto National Forest owns all of the land that Tortilla Flat sits on. The land is leased to businesses and tourist attractions.

Tortilla Flat thrived as a small community throughout the 1930s. Although it never reached enough residents to become incorporated, it was big enough to get a post office.

“Tortilla wasn’t owned necessarily in its entirety by one family up until the 1950s. Before that, it was a settlement of people that built their houses and stayed out here,” Fleischman said. Historians believe that significant flooding in the 1940s drove most residents out of the town – but six residents still remain today.

POPULATION: 6
According to the U.S.P.S., Tortilla Flat is presumed to be Arizona’s smallest official “community” having a U.S. Post Office and a voter’s precinct.

“How we envision our leadership of Tortilla is that we’re taking it into the 21st century,” Field said.

“We’re at the mercy of mother nature,” Ellering said.

Tortilla Flat is open to travelers passing through or looking for a getaway for the day. “We’ve been kind of an escape for people in this hard reality that we’re all living right now,” Field said.

Visitors can enjoy the restaurant and saloon, country store and dozens of nearby recreational activities like the Dolly Steamboat, hiking, boating and horseback riding.

While Tortilla Flat is only 20 miles from the city, Ellering said it can feel like it’s 100 miles away. “It’s easy to throw everybody in the car, enjoy the drive out here, relax and take in the sights. Enjoy some good food, and have a history lesson.”

Field and Ellering plan to maintain the properties to ensure everything stays in good condition, so that, “100 years from now Tortilla Flat still has relevancy,” Field said.