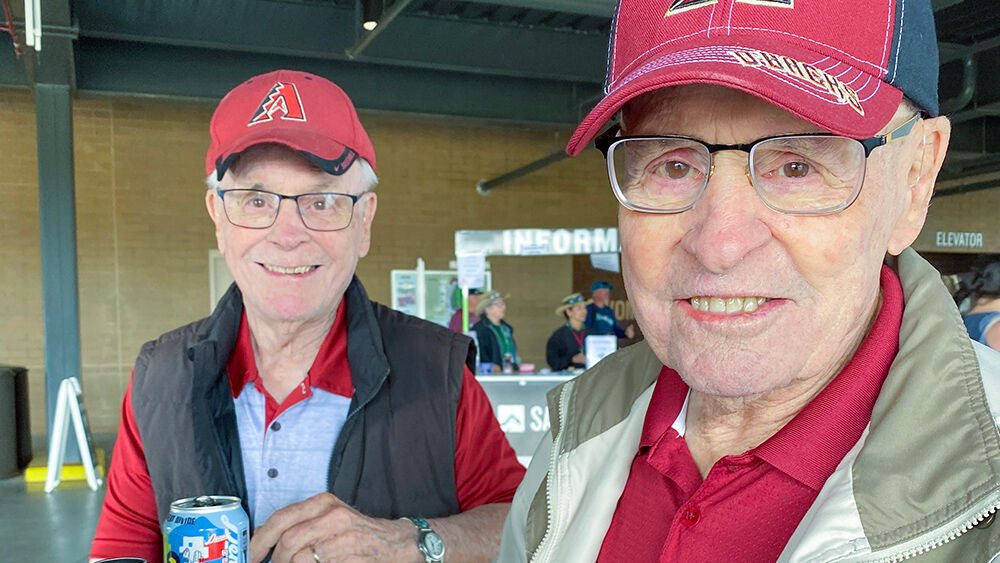 Bill and John a couple of years ago enjoying one of their favorite hobbies,  hanging out at a Diamondbacks game. 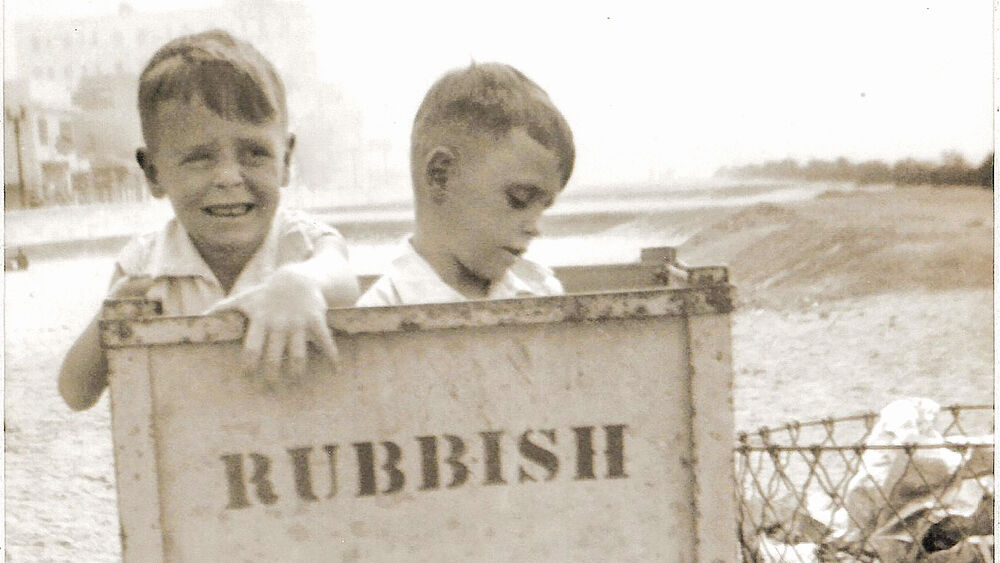 John and Bill’s brother’s solution to babysitting the boys:

Bill and John a couple of years ago enjoying one of their favorite hobbies,  hanging out at a Diamondbacks game.

John and Bill’s brother’s solution to babysitting the boys:

Back then, downtown’s Orpheum Theatre was the last and largest major construction project before the Great Depression hit, and in 1931, the population of Phoenix was 50,000.

These may seem like facts you would only find in the history books. John and Bill Haug, however, were part of it all.

The twins were born in Globe but grew up in the Arcadia area. Before Phoenix was a booming metropolis, they used 48th St. and McDowell and 24th St. and Camelback Road as their hunting grounds.

They attended Creighton Elementary and North High School, and eventually Phoenix College and U of A. John joined the Air Force while Bill took to his studies, eventually becoming a lawyer with Jennings, Strauss and Salmon before starting his own practice.

He explained that the highlight of his time in MATs was taking the U.S. team to the 1956 Olympics in Melbourne, Australia.

“Due to the good times I had as a navigator, I decided to become a pilot. I went through pilot training in 1958, and in 1959 began flying B52s. In 1963, I was transferred to Loring AFB, where I upgraded to an aircraft commander on B52s,” John said.

One of John’s scariest experiences was in 1968 when there was a fire in the crew compartment of the B52 he was piloting while flying over Tule, Greenland.

“The crew and I bailed out over Tule, and the plane crashed eight miles west – in the middle of winter – along with the four hydrogen bombs that were on board,” John said.

He eventually served one tour in Vietnam and retired from the service in 1970.

On the other side of the world, Bill was having trouble figuring out what he wanted to do.

“I was graduating with an accounting degree, and I knew I didn’t want to be an accountant,” he said. “My folks always wanted me to go to law school, so I went and fell in love with it.”

It worked out, as Bill was part of a case that became so well-known, it was turned into a movie – the Martin Scorsese blockbuster Casino.

The case involved a slot machine scam in Las Vegas where the Milwaukee arm of the Chicago mob were the undisclosed owners of four casinos. “They were skimming money off the slot machines by going in and resetting the rings so it would pay less than they were supposed to,” Bill said.

Bill’s investigation showed the slot machine manager was embezzling; the manager disappeared soon after. “We concluded the mob was skimming, and I told my client it would cost $1M to prove the case, so they settled with the insurance company for $100K,” Bill said.

Eventually, four mobsters pled guilty to criminal charges for the scam, and Bill’s client didn’t have to pay anything.

Bill also worked on cases involving the Intel chip processing plant in Chandler and what he says was his most interesting case: He caught the government supplying false documents to his client.

Because of his work, Bill has received national honors, including induction into the Maricopa County Bar Hall of Fame and the Arizona Supreme Court Award for Outstanding Pro Bono Service.

Before all of that, the twins spent their formative years exploring a growing Phoenix, hunting and fishing and enjoying the outdoors.

“It was great growing up in Phoenix because we could do anything we wanted; go anywhere, and our parents didn’t have to worry about us,” John said. “We got into roller skate racing in our teens and attended several tournaments, including a national championship race in Cleveland.”

John and Bill said one change they’ve seen in Phoenix is how big it has grown – from a little town of around 50,000 people in the 1930s to more than one million.

“Personally, the greatest change is technology. I didn’t have a phone in my pocket when I was a kid, but now I don’t leave home without one,” John said.

“Eventually, the hunting grounds we used to use were gone. Then, the city adopted an ordinance that you couldn’t shoot off a gun but would exempt certain areas where you could still shoot birds,” Bill said. “We had to go down and hunt south of the South Mountains, south of Maricopa.”

John said that some of his favorite memories include getting married, his daughter being born and having a twin brother to pal around with.

They have both traveled extensively, with John’s favorite place being Russia and Bill’s favorites being Jamaica, Cozumel and Alaska.

“We took the ferry out of Homer and went through the Aleutian Islands, where you have the chance to meet the people living there,” Bill said. “We ended up in Dutch Harbor, and what I remember was the vast number of eagles. Those suckers were everywhere! You didn’t think of them going extinct when you saw them.”

Even with all the traveling, the twins continued to call Phoenix home. John said that no other place compares to Phoenix.

Nowadays, Bill and John spend time out on the golf course or watching their favorite sports teams – the Diamondbacks and the Suns.

“I was a season ticket holder from the beginning with the Suns. We saw all the great Suns players right from the start, and when they moved to the new arena, we moved to the 7th row, the best row in the arena, according to Jerry Colangelo,” Bill said.

For their birthday, the twins spent the morning playing golf and then had a family birthday party.

Their goal for the future?