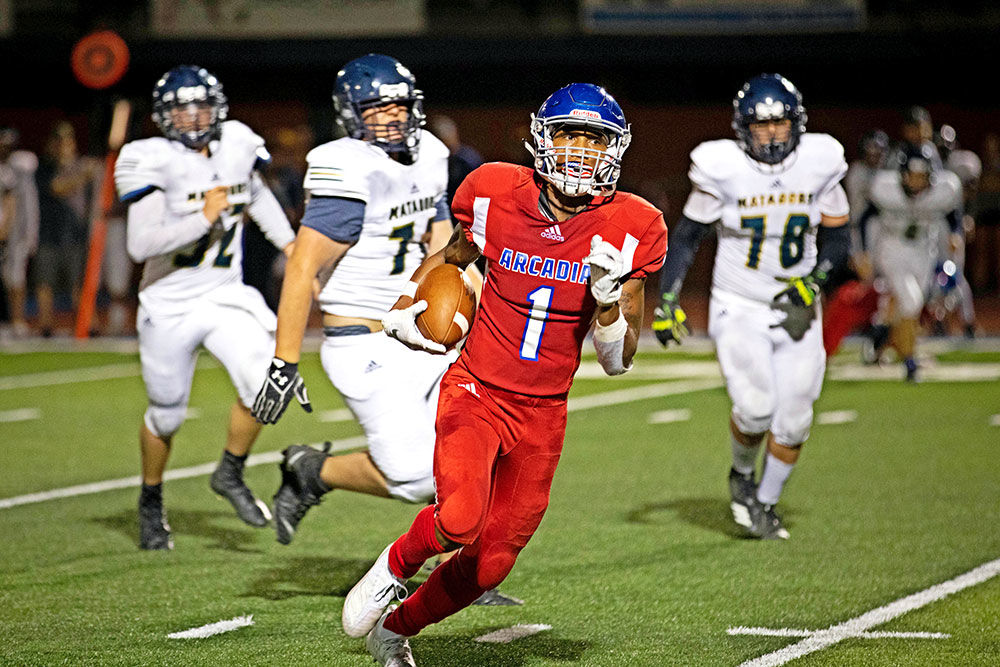 Senior QB Kadin Beler (1) has been one of the standout players for the Arcadia Titans during the 2019 season. 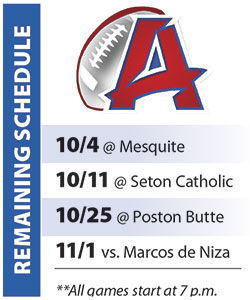 A total of 162 points. That is the combined margin of victory through the first five games of the 2019 season for the Arcadia Titans football team, under head coach Kerry Taylor.

In the first game Arcadia rolled to a 62-14 victory over Coronado. The team followed that with another dominating 54-7 performance over Deer Valley. The third game was the first time the team allowed more than two touchdowns, a 50-19 victory over Washington, a game that – surprisingly – was a little bit too close for comfort for the players. Game four saw the Titans cutting it close at St. Mary’s with a final score of 36-28. In quarters one and three the Knights were only three points behind until the fourth quarter when the Titans scored eight points, winning the game. The Titans homecoming game against Shadow Mountain was a nail-biter as Kadin Beler racked up 399 passing yards. There was one interception by senior Paxton Earl. Arcadia won with a score of 55-27.

“The season started off really well but the game against Washington was a wake-up call,” said junior defensive back Sysco Rodarte. “We have enough talent that we should be blowing teams out and not letting them score at all.”

Coach Taylor echoes many of these sentiments. After a 6-4 record in his first season, he is hungry for improvement; and as a former Arizona State and NFL wide receiver, he knows what it takes to become one of the best – mentality and effort are at the top of his list.

“The effort is very good most of the time but sometimes we get tired too easily,” said Taylor. “We need to get better at fighting through it when we are tired and keep mentally in the game for all four quarters.”

There are a lot of positives for the team, including its maturity, according to center Jason McGrath.

“The season has started off very well. We have a lot of new guys,” said Jason. “Everybody on the team has shown a lot more maturity so far compared to last year, and I think our effort is a lot better.”

Taylor specifically pointed out senior quarterback Kadin Beler as a positive. Beler is averaging more than 300 total yards per game, with 21 total touchdowns and only two interceptions overall.

“Kadin is playing really well,” said Taylor. “He’s getting the ball to a lot of different receivers and he is really in command at all times, which is awesome.”

In addition to Beler, senior running back Kylin Johnson has gotten off to a hot start averaging over 13 yards per carry.

On the defensive side of the ball, Taylor really wants to see improvements in tackling and discipline, citing far too many penalties that need to be cleaned up. He really likes the strong play of the linebackers, however. Junior Nixon Nolan leads the team in tackles so far.

While Arcadia has dominated its opponents thus far, the season only gets tougher from here. As of press time the Titans were prepared to face off against Saguaro High School at the end of September. This is the team that football pundits believe is one of the best teams in the state and amongst the best in the nation. Taylor isn’t worried about opponents though – he is focusing on his own team’s improvement.

“We have to just keep getting better at finishing plays and finishing games,” said Taylor. “We’ve got to do whatever we have to do to play to our potential.”