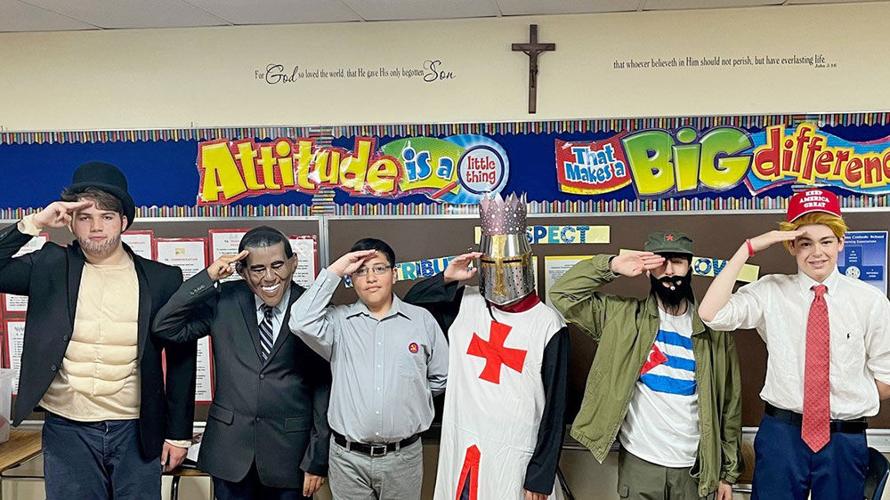 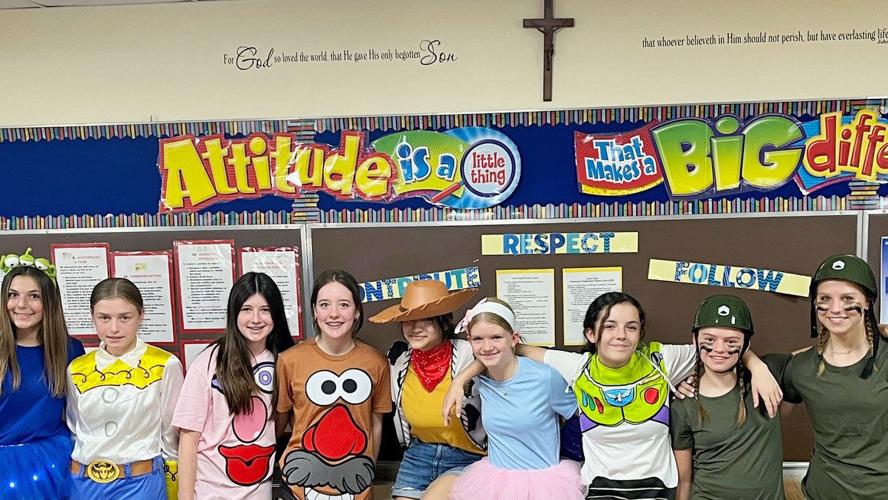 St. Theresa Catholic School held all the usual pomp and circumstance as their eighth-graders finished the school year: awards assemblies, a school-wide prayer and a graduation ceremony. However, one of their celebrations was a little unorthodox, but a lot of fun: the annual Teachers vs. Students volleyball tournament.

Eighth-grade teacher Mary Beth Abbot said that the original teachers vs. students volleyball game was held sometime around 1982 and began when a few eighth-graders played their teachers during an activity to celebrate Catholic Schools Week.

Wand explained that each day has a different theme and may involve treats, games or other fun activities. Usually, there’s a free dress day or a themed day, like “neon clothes day.”

“It’s a big deal to have free dress when the norm is a uniform! This year, we kicked off the week with a party and open house after mass on Sunday,” Wand said.

Six teams of eighth-graders participated in this year’s volleyball match. The individual teams dressed in a theme to make the tournament even more fun and inventive. One featured the characters from the Toy Story movie franchise, while another team represented the Power Rangers.

“It was a fun day,” Wand said. “The eighth-graders won two to one, and it was tied after the first two games. No one remembers the final scores of each game – we were all having too much fun!”

“My favorite part was being together with friends and having fun with my class,” student Carsten Ellingson said. “We had six people on our team and dressed up as ‘backwoods boys.’ I also played in the championship game which was a mixture of boys and girls from various teams.”

As Carsten heads to Brophy next year, he said the biggest thing he’ll miss is the St. Theresa teachers because of their guidance and support.

“A number of parents attended and you could hear a combination of cheers, laughter and applause throughout the gym,” Carsten’s mom, Kate, said.

She said the best part was seeing the creativity of each team and their smiles.

“The camaraderie during the matches was palpable and you can’t help but to get brought into the fun,” she said.

Student Zoe Martin’s favorite part of the tournament was being able to play against the teachers that she had known since preschool.

“I got to run around the gym dressed up in a costume and we ended up beating the teachers!” she said.

There were nine people in Zoe’s group and they dressed up as characters from Toy Story – Zoe was Mr. Potato Head. What’s more, Zoe’s dad Brett was one of the refs at this year’s game.

“I was asked by one of the moms to be the ref – it was worth it to see the look on Zoe’s face,” Brett laughed. “It’s so great to see how excited the eighth graders were to dress up, let loose and be able to act like teenagers.”