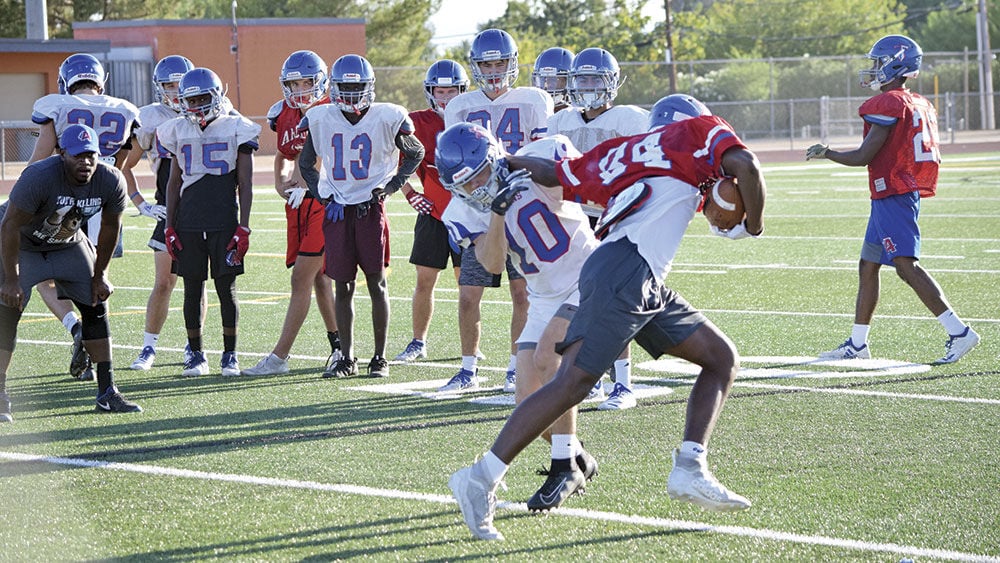 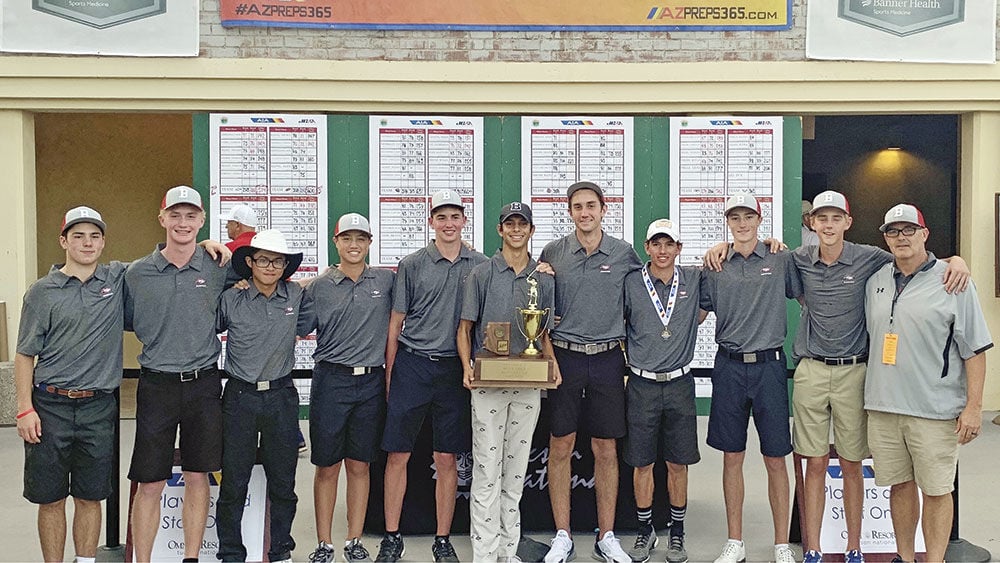 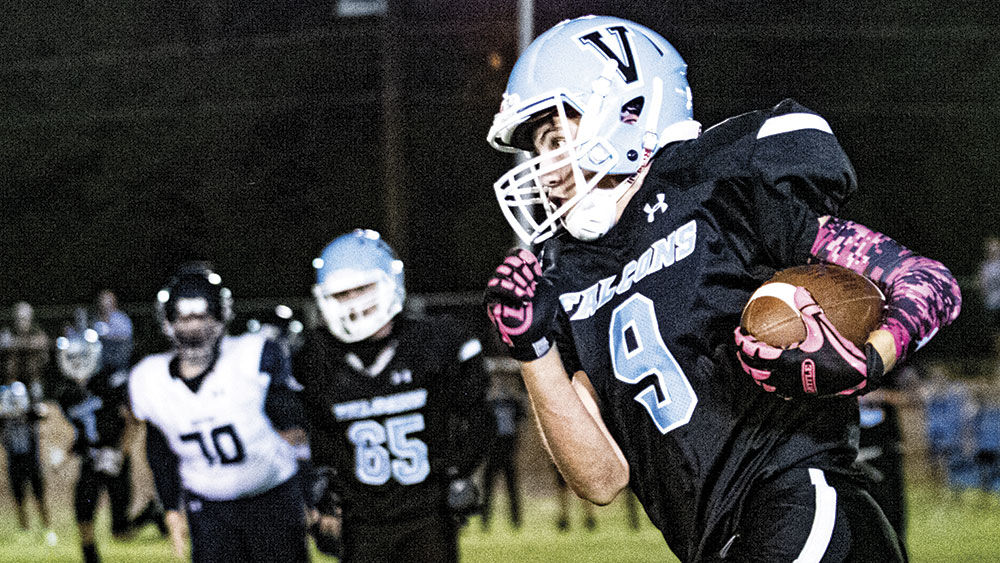 Veritas Falcons Football had a season of many firsts this year, including making the state playoffs. 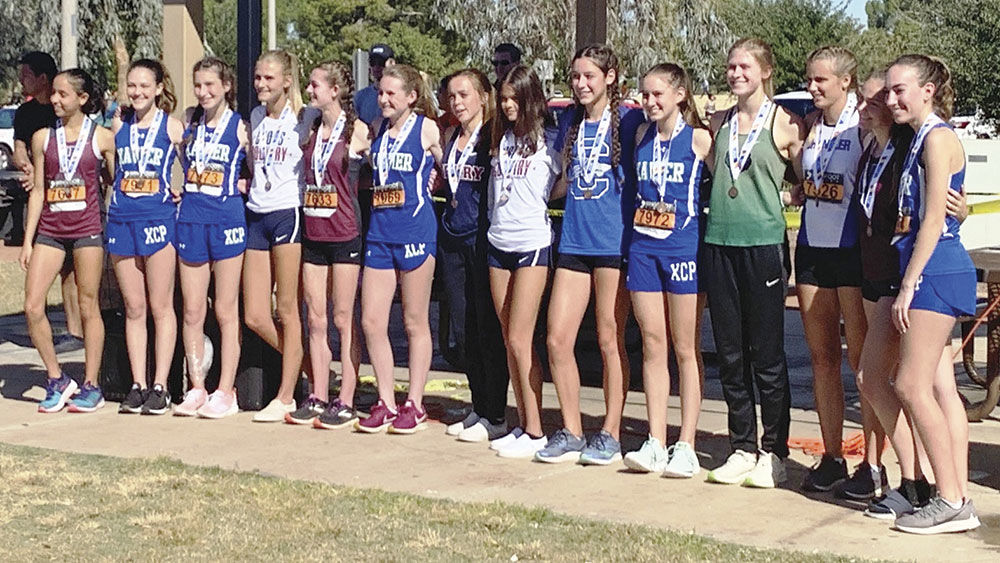 Xavier Cross Country had a successful season with honors and victories to go around.

Veritas Falcons Football had a season of many firsts this year, including making the state playoffs.

Xavier Cross Country had a successful season with honors and victories to go around.

Fall sports 2019 has come to an end and area schools each had a memorable season. Check out what happened at Arcadia High, Xavier Prep, Brophy Prep and Veritas:

The Arcadia High football team came out strong in the 2019 season before fizzling out in the second half. The Titans started off 5-0 and won four of those games by at least 30 points. Junior defensive back Sysco Rodarte remarked after their third game that they knew the team needed to improve.

“The season started off really well, but the game against Washington was a wake-up call,” said Rodarte.

(Former) Coach Kerry Taylor told the Arcadia News back in October about his concerns for the team’s stamina for the second half of the season.

“The effort is very good, but we get tired too easily,” said Taylor.

Those concerns came to fruition as the Titans lost four in a row before winning their last game. The Titans finished the season 6-4 and missed the playoffs.

Senior quarterback Kadin Beler was a standout throughout the season, accounting for 33 total touchdowns with only nine interceptions. On the defensive side, senior linebacker Will Constantinou led the team with 86 tackles.

Shortly after the season ended, Taylor stepped down as coach after two years and a total record of 12-8.

According to boys’ golf Coach Jason Jones, the season was a major challenge due to unexpected departures of a few key players.

However, the team responded well and qualified for state, where it finished in third place. Junior Gavin Aurielia was a huge part of the team’s success, winning the state individual title. Jones was very complimentary of Gavin’s leadership, especially with a young team around him.

“He has incredible poise, and he’s not afraid to battle, which is exactly what I want,” said Jones.

“They never once discounted the fact that they could do it,” said Jones. “In a year we basically brought four new guys onto the roster and rebuilt the team through our resiliency.”

According to coach Tyler Moore, the Arcadia boys’ cross-country team accomplished many of the goals it set out for this year. The athletes set personal best times in the 5k and runners improved their times throughout the season. Moore said that sophomore Luke Sleeth and team captain Carson Trickel were the high performers and that the biggest moment for the team was competing at a meet in California.

“We look to return next year to this meet and continue to challenge the team with new and exciting cross-country invitationals,” Moore said. The team missed out on state this year, but plans to improve and excel in the coming season.

According to Coach Sarah Boustila, seniors Jasmine Alyasiri, Izzy Rich, Sophia Colson, Keylin Chavarria and Kathleen Myers-Haeussler were all essential to team success through their leadership and running ability this season.

Jasmine was able to capture a top 20 place in sectionals. The team won every dual meet, but narrowly missed qualifying for state.

Junior Grant Stoddard became the Division 2 state champion in the 50 freestyle and 100 fly. Grant broke the 25-year-old school record in the 50 with a score of 20.60 seconds. The boys’ team also finished fourth in the 200 freestyle relay swim.

Congratulations are also in order to the girls’ swim team, including Haley Chesno, Sarah Harman, Millie Sicko and Kaela Schloz, with their third-place finish in the 4x100 free relay.

Brophy Prep had a successful season led by a stout defense that was said to be one of the best in the area. The Brophy defense gave up only 22 points in its first six games, led by senior linebacker Bryce Michael, who had 70 tackles.

On the offensive side of the ball, Brophy was led by a senior quarterback-running back duo. Quarterback Matthew Winter threw for 17 touchdowns to only two interceptions throughout the season. Running back Andre Eden gave the offense balance by running for 693 yards and six touchdowns. Brophy’s football season ended with a first-round loss to Mountain View, 35-19.

Brophy boys golf came into the 2019 season as the defending state champions and one of the favorites to hoist the trophy again under Coach Jon Shores. At the competition, five players were within a stroke of each other competing for the last spot.

Shores had two teams of five play in a tournament, and they won with both teams, which he believes really spoke to the quality of the depth of the team. Brophy finished in second place behind Hamilton.

Brophy swim and dive had an exceptional season, capped off by its win at the state championship. Mateja Milovanovic was a dominant force at the competition, winning the 200-yard freestyle and the 100-yard backstroke. In addition, Mateja was a part of the 200 and 400-yard freestyle teams that set state records.

The Falcons were able to make the state tournament for the first time ever this year. In the past, the Falcons have had as few as 18 players on the team, but this year had 31. The Falcons went 8-2 in the regular season, including a perfect 5-0 in their division.

The team had a high-powered rushing attack, averaging 180 yards per game on the ground and 8.3 yards per carry as a team. Sophomore quarterback Gage Lentz finished the season with 37 touchdowns, 13 of them rushing, while junior running back Nisa Maafu was a big-time playmaker, rushing for 821 yards and eight touchdowns with over 12 yards per carry.

The highlight of the year was beating Chandler Prep for the first time in school history, according to Veritas Athletic Director Kayla Walsh. The football playoff bracket reveal was also an exciting moment for the squad, but the celebration didn’t last long. Veritas suffered a 63-19 loss to Benson in the first round.

Veritas swim and dive was able to qualify 12 swimmers to the state championship  this season. The team went to the state tournament in early November to defend individual state titles from last year.

At the Eagle Invite meet, the team was able to break five records. Devin Esser, Michael Shiras, Ian Rathsburg and Jake Marbach broke meet records almost every time they competed and are the defending champions in their relay. The Veritas boys finished third in state and the girls finished 12th.

Led by seniors Averi Miller, Jessi Medlin and Ellie Coulter, the Falcons were able to clinch the three seed in the state tournament. Miller finished second in total kills across all of Arizona.

“Without this trio, we would not have had the season we had,” said Athletic Director Kayla Walsh.

One of the big moments for the team was taking the top-ranked team in the state, Northwest Christian, to five sets. Despite losing the match, the performance showed the Falcons could compete with some of the best teams in Arizona. They made it to the third round of the state playoffs before losing to Scottsdale Christian Academy.

“‘Good competition is good for girls,’ is our motto, there’s something for everybody here at Xavier to encourage that competition,” said coach and Athletic Director Lynn Winsor. The team finished in second place in the state tournament, as did Ashley in the individual competition.

Xavier volleyball was able to compile an impressive 11-6 record this season, despite being in the toughest region in their division. Playing some of the highest ranked teams in the state, including four of the top eight, the season was highlighted by a win against Hamilton on senior day. The team ended their season with a loss to Highland 3-2 in the second round of the state playoffs.

Xavier girls’ cross-country team had a successful season led by coach Dave Van Sickle, highlighted by a win in the Titan Invitational and a sectional win in early November.

The team finished third in the state championships.