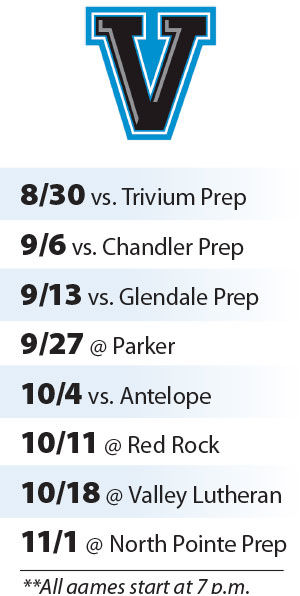 Things were at an all-time low for the Titans football program two years ago when the team posted an 0-10 season. However, since Kerry Taylor took over as head coach last year, the team has been on an upward trajectory, posting a 6-4 season during 2018. Taylor’s coaching approach and the team’s remarkable turnaround helped bring excitement back to the team, but it wasn’t without challenges.

“In my first year at Arcadia it started with learning how much football these kids knew and understood,” Taylor said. “It was really starting from ground zero. That’s why we are so excited for this season because now we hit this spring and summer on the fly. Mentally the players can handle so much more.”

With one strong season under his belt, Taylor plans on using last year’s momentum to lay the foundation for this year and hit the ground running. His players also have a year under their belts, so they start practice already understanding his playbook and expectations.

“We are so far ahead as a football team right now compared to last year,” he said. “Last year we were so young and small. This year we’re older and look a little different.”

Taylor expects this year’s squad will improve in its preparation for each opponent. As his players mature and focus on exceling at the things they can control, he believes the team’s larger goals will take care of themselves.

“Our motto is ‘be a pro,’” Taylor said. “Everything that we do on and off the field, we want to represent ourselves as pros. We hold each other accountable and take care of the team.”

Entering the season with high expectations and strong discipline, Arcadia is the team to watch in Division 4A.

‘Driven’ is the first word that comes to mind when talking to Jason Jewell, the new head coach of Brophy College Preparatory. Straight-forward and no-nonsense, Jewell exudes confidence about the upcoming season. And since Brophy plays in Division 6A, confidence is something he needs.

Called the “Godfather,” Jewell has years of experience in football. Prior to coming to Brophy, Jewell spent 11 years as an assistant coach at Glendale Community College, coached high school football, worked as a writer, operated a college football recruiting business and also played at Phoenix Washington High School. All of his football experience should help him adjust to the pressure and expectations that come with being the head coach of a storied program.

“I’m the third coach in three years,” he said, “which is not what Brophy is used to. They had three coaches in like 40 years before that.”

And Jewell definitely has some big shoes to fill.

Jon Kitna, a former NFL quarterback who left Brophy last summer to become the quarterback coach for the Dallas Cowboys, led the team to a 7-3 record and took the Broncos to the playoffs. Jewell expects to continue being a playoff team, and has set winning a playoff game as his goal for this year. Lofty, but achievable, aspirations for the coach’s first year.

Brophy has a consistent winning record and has won two state championships. The team is a perennial contender, bolstered by strong play on both sides of the ball. But the competition in the Premier 6A Division is tough.

Having to face four Chandler high schools in its division, Brophy has its work cut out for it to even make the playoffs. “We’re in the premier region,” Jewell said. “So, it’s very tough, very competitive.”

Another advantage for the Brophy team is the school’s commitment to academic success. Being a private institution, Brophy also asks for rigorous discipline from its students. Surviving with a 2.5 GPA doesn’t cut it at Brophy. This cultivation of excellence seems to be a key ingredient in the school’s championing ways.

30 solo. One sack and one caused fumble.

A classic underdog uprising story in the making, the Veritas Falcons are looking ahead optimistically to the upcoming season. From having just enough players to field a team and going 0-10 a few years ago to posting a 6-4 record last year, the Falcons have been steadily improving during the past few seasons. And despite having a smaller pool of students from which to create its team, the team’s head coach expects its success to continue in 2019.

“You’re sitting in the locker room of one of the smallest teams in terms of student body,” Head Coach Jason Black said. “We’re not fishing from a very big pond, so you are kind of limited to how big your roster’s going to be.”

Because of the smaller roster, Black said many of his players play on both sides of the ball and on special teams, getting brief breaks whenever they can fit them in. But even this brand of iron man football is a better option than what he faced when he first arrived at Veritas.

This is Black’s third year as head coach and fifth season with the team overall. He recalls that when he was first brought in, the program was almost shut down. “They were going to get rid of football entirely,” he said, “but a group of parents said, ‘You would be making a mistake. You’ve got a lot of kids here that enjoy playing’.”

Back then, with only nine kids on the roster, Black knew the season wasn’t going to go well. But by the end of the season, Veritas at least had 16 players on the roster – although the team lost every game anyway. At a minimum the kids still got to compete, but Black knew he had a mountain to climb. Fortunately, he was up for the task.

Black described this time as “dying by a thousand paper cuts, but at least something was happening.”

Last season was when the team really made a substantial leap forward.

“Last year, you could start to see it take off,” Black said. “We had a really good group of sophomore and freshman guys making a ton of contributions with some really good senior leadership. We finally have a perfect combination of both going on.”

Veritas posted its 6-4 record last year, finished with a No. 19 ranking and beat the No. 9 team during the season, which was the first time Veritas ever beat a ranked team. The team fell short of its season-long goal of making the playoffs, but that hasn’t dampened spirits for this year.

“We lost a few, but we’re getting those bodies back through the freshmen and the main core is still intact,” Black said.

Black counts Veritas’ culture of striving for excellence as a major asset for his student-athletes.

He believes since these players are already asked to dig deeper in the classroom, it’s easier to ask the same on the field.

His strategy looks to be working, making Veritas another team to watch this season.

Went 4-0 in his return from injury as the starting QB.

Jackson Walters, OL, DL: Top 25 Defensive Lineman in a stacked group in the 2A division and No. 7 in the region for tackles. Led the team in QB hurries and pressure.