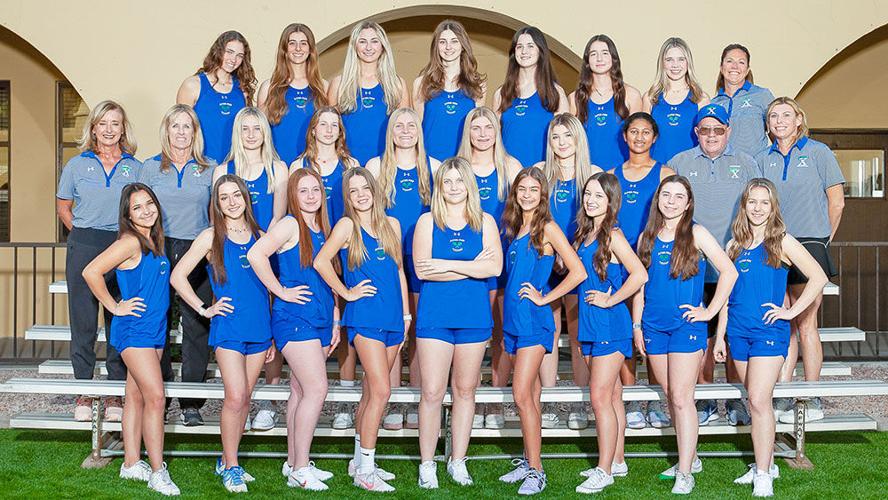 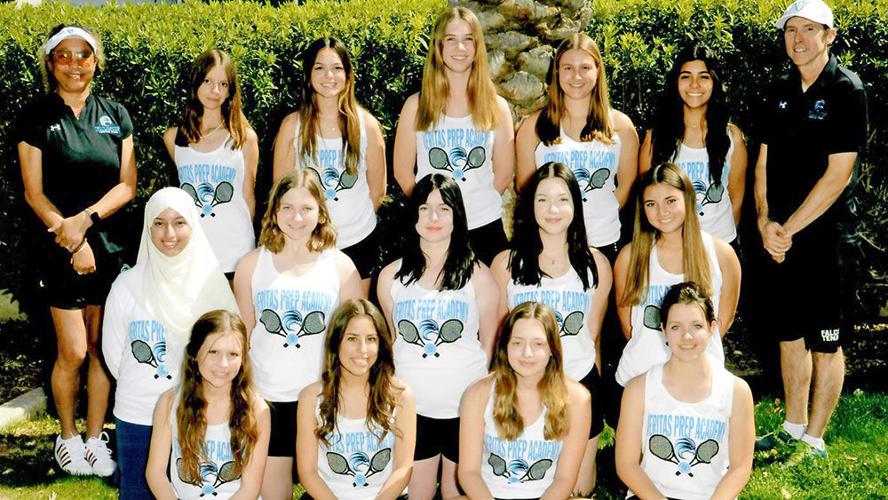 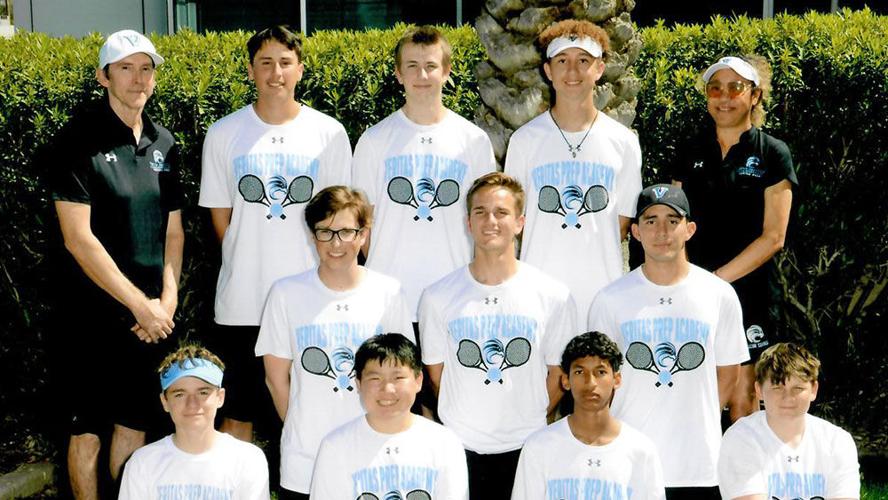 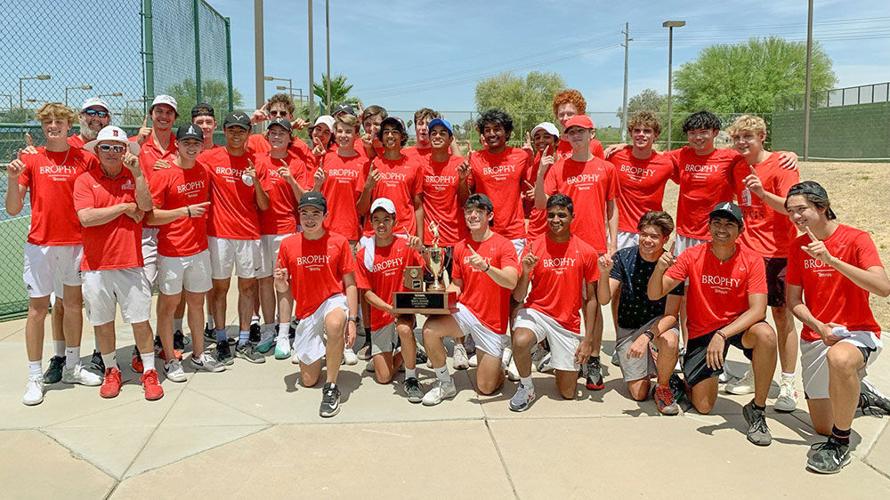 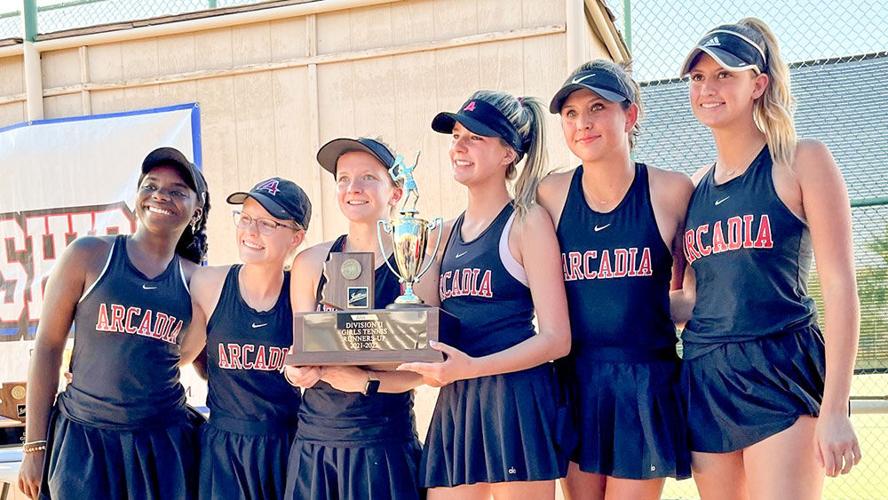 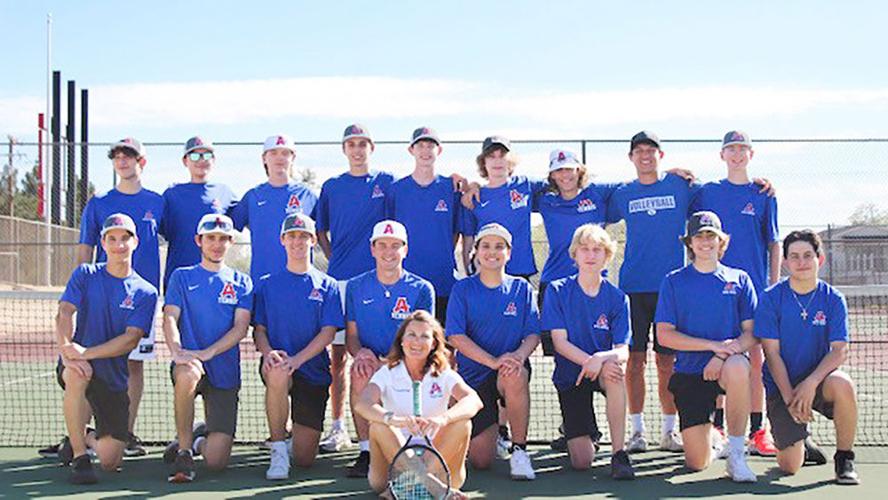 While winning matches and making it to the state championships was a common goal among the tennis squads at area schools, there was another prevalent theme: community. Here’s a round-up of our neighborhood tennis squads’ seasons.

The Titans ended the season with a final record of 13 wins and two losses. They’re currently ranked ninth in Division 2 after making it to the first round of state and losing to ALA Gilbert North, 2-5. This year, there were 17 students on the JV and varsity teams.

“These kids had a good sense of community,” Coach Karen Fleissner said. “They held each other accountable while adding a splash of humor and fun. Everyone played so well, and we are really happy with our season!”

Fleissner said that the singles matches were tough and that there were a lot of tiebreakers.

Practices started with running, stretching and warm-up strokes. From there, they varied on what the team needed the most help with.

“Rhys Williams was my number one on varsity, helping the team by teaching other students that needed help with their strokes. Thomas Farar was awesome at getting the team organized at practices and starting things off,” Fleissner said.

Freshman Tristyn Abbott has been playing tennis for a little over four years. He said that his goal this season was to improve his playing and competing abilities.

“My team was super motivational, and I had support on anything I was trying to achieve. Our team captain, Rhys, was a great leader and really helped me play my best,” Tristyn said. “I also feel another major strength of our team was Coach Karen – she put up with all the wacky things we did and still remained chill.”

“I think some of the strengths of our team is that we all are very motivated and close with each other. We all want to do well throughout the season but also have fun. Although tennis is mostly an individual sport, having a cohesive team is a key to winning our matches and having a great time.”

The Lady Titans had an undeniably successful season. They went undefeated during regular games, ultimately gaining the number two spot at the state championship.

The squad also became Division 2, Section 6 champions – out of 69 schools, Arcadia High is now in second place as state runners-up against Catalina Foothills.

There were three freshmen, one sophomore, and two seniors on the varsity team this season. Coach Brian Corte helped fill in for the girls’ team at the last minute. Corte teaches P.E. and was previously a school principal and football coach at other institutions.

“He joined our team a week after tryouts and made it work,” Tennis Booster President Deidre Turley said. “He played a huge role in bringing the girls together and building up their camaraderie and injecting confidence and team spirit.”

“Freshmen Emmi Kolyszko and Vessa Turley are elite tennis players within their circuit – to come into high school and play as they did individually and as a team is admirable,” Corte said. “The entire program, with 26 student-athletes on the roster, is unconventional, but allowed more students to participate. In that regard, the varsity team worked tirelessly to build bonds and celebrate a great season of competition and development.”

Brophy Prep went undefeated in the regular season (18-0) and cleared the board at state, with four wins against Basha, Desert Vista, Hamilton and Chaparral – claiming the No. 1 spot in Div. 1.

The season began in mid-February and ended with the State Finals in May. There were 14 regular season matches and four rounds of playoff matches.

“Our team is resilient, determined, smart, and they play well together,” said Coach Eric Chalmers. “Tennis is an individual sport, but what makes high school tennis special is the opportunity it gives us to experience what it’s like to play our favorite sport and represent our school.”

Chalmers said that every team member consistently works on developing certain aspects of their game. Practice involves lots of doubles games since it’s not something that’s commonly focused on outside of team tennis.

“We also simulate many different match play scenarios and situations to ensure that we are as prepared as possible for anything that can happen while we’re playing a dual match,” Chalmers said.

“Each one of them, led by Jack Brown (who will be playing tennis for the Air Force Academy next year), brings unique talents and abilities that always put us in a position to win,” Chalmers said. Their ultimate goal was to secure a state championship after falling short in last year’s finals.

“We always talk about being a tennis family and making sure that when we’re out there in our matches, we play for each other, and we play together,” Chalmers said.

“Our players are determined to succeed in any environment they are put against,” Veritas Athletic Director Kayla Walsh said. “Their knowledge of the game is impeccable, and their heart is unmatched.”

Walsh explained that because the 25 teammates were very young, they needed more time on the court and more game experience – she said that those two things are always a good starting point to work toward the team’s goals. She also said that they welcomed many new players to the team this year.

Both squads practiced four days a week, focusing on fundamentals and mental readiness for matches.

“Everyone contributed this season. One of the strengths of the Veritas tennis high school program is that everyone cares about everyone else on the team,” Walsh said. “It might sound cliché, but we are truly a family. We had our challenges this year, but everyone was there for each other at the end of the day.”

The Falcons’ team motto has always been a quote from tennis player Arthur Ashe: “Start where you are. Use what you have. Do what you can.”

Junior Tanner McGeough had this to say about the program: “The Veritas tennis team is a great group of people. I think everyone is inspired not just to play for themselves but their teammates and coaches, as we care tremendously about each other.

Senior Michael Torrez felt the same: “I stayed motivated throughout the season because our team environment is so invigorating that it’s not hard to have ‘happy feet.’ We know each other’s strengths and weaknesses and play off of that, as well as ultimately enjoying the matches just as much as we want to win them.”

The Gators were flying high at the end of their season as they went 13-1 in the regular-season dual matches and won the Millennium Quad tournament. In May, the varsity team won all three state tournament rounds but unfortunately finished with a loss against Desert Mountain High School in the Championships.

“We have ten players on varsity and 11 on the JV squad,” Coach Laurie Martin said. “In addition, we have another 70 girls on our lower JV2/3 teams that just compete with each other!”

Martin said that their strengths lie in the team’s depth.

“Danielle Dyer and Ryan Kershner are a very strong doubles team that won the State Doubles Championship. The majority of our varsity players play year-round, and they are always looking to improve their game,” Martin said.

The Gators will continue to work on control and consistency, especially with the younger players. An important quality, according to Martin, is that all players have a high tennis IQ.

“Our ultimate goal is to enjoy the journey and enjoy playing the game. We focus on the process, not the outcome,” Martin said.