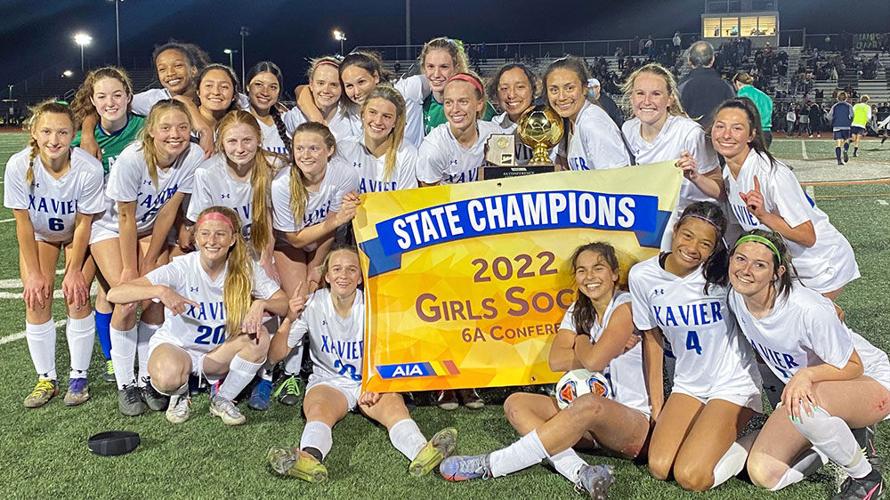 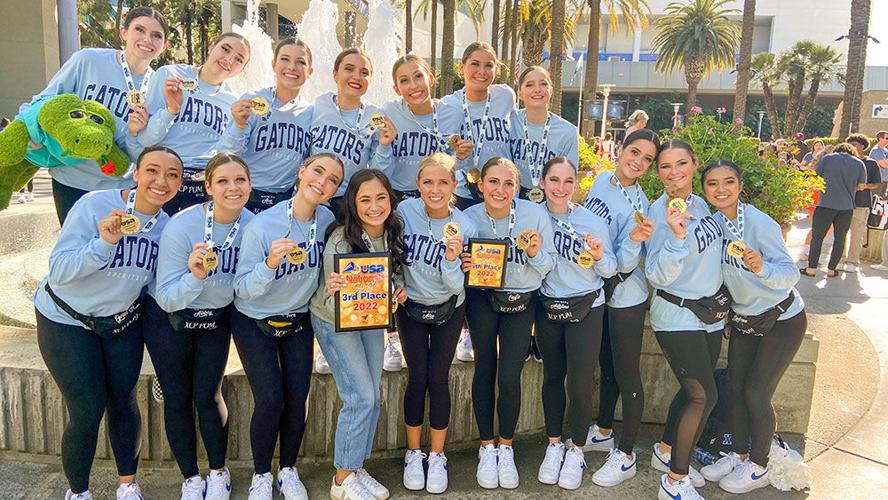 It’s been a big spring for sports teams at Xavier Prep, with the Gators making a statement in soccer, archery and Spiritline at their competitions. Here’s a roundup of the school’s success at recent championships on the state and national levels.

It was a thrilling finish for the team as they went back-to-back at the state champs, one year after bringing home the 6A state title as a fifth seed.

Led by Coach Barbara Chura, the Gators went 12-3-2 overall, with a five-game win streak at the end of the season and 68 goals for and just 12 goals against. They finished second in the regular season behind Perry and beat Chaparral 1-0 in the quarterfinals and Liberty 3-0 in the semifinals.

Bella, who had a direct kick goal in the quarterfinal win over Chaparral, said the Gators were driven to succeed this season, working hard to earn their spot.

“It was a surreal experience. We all wanted to win a state title and come playoff time, we left it all on the field,” Bella said. “We played for each other and never gave up.”

Xavier archery was one of the top teams at the 2022 AZ Archery in the Schools State Championships, qualifying for the national tournament in Salt Lake City at the end of April.

There were 437 archers from 33 schools overall, with 27 Gators hitting the mark in the high school division. They finished third in bullseye with a score of 3,106 and second in 3D with a score of 1,569.

Coach Kelsey Gerchar said it was awesome to see the Gators do well in both events.

“I remember when 3D was first introduced and how so many girls didn’t want to shoot the 3D targets, but now, they love it, and they have higher and consistent scores,” Gerchar said. “For bullseye at the State Championship, the girls were in the zone. You could see their determination and that their end goal was nationals. I am so proud of them!”

Despite the challenges of a tough competition and a long season running from September to April, the Gators persevered, with this year marking the first time Xavier took an entire team to the national event.

Practices for new and returning archers started in the fall, and tryouts for the competitive team happened in the winter. With a comp and a development team, the coaching staff could support all archers and ensure the most dedicated students were represented at state.

“I think another key success was within the coaching staff. We have three USA Archery Level 4 Instructors, and their knowledge and coaching skills help our team have the best form, resulting in higher scores,” Gerchar said. “The coaching staff also are the biggest cheerleaders of the students. We get them excited, help hype them up, remind them to stay positive and have fun.”

Junior Kylie Cavanagh credits the encouragement from her teammates and coaches with helping her succeed.

“The support from my team helped me want to try even harder and allowed me to achieve personal bests. I was able to increase my skillsets and achieve even higher scores,” Kylie said. “The highlight of the season was us being able to perfect our techniques and grow closer together as archers and as a team.”

After qualifying for USA Spirit Nationals with a second place finish at qualifiers in January, Xavier Spiritline shined bright at the national event in Anaheim. The Gators competed in five divisions against 20 other varsity schools from across the country.

The cheer team had a clean sweep, taking first in every division they competed in. This included the All Girl Stunt event, where five of the team’s top performers completed as many challenging skills as possible in one minute. Their Crowdleader and Medium Varsity Show Cheer routines also impressed the judges and earned them the title of national champions.

“The experience was amazing. Though we still had some restrictions, the girls had a great time with each other and all the parents who attended,” Gaspar said. “They will have memories to last them a lifetime!”

Spiritline coaches and judges were impressed with the Gators’ determination and execution of every performance.

“The key to their success was that they never gave up. These girls had to deal with quarantines and injuries along the way and never lost sight of their goals,” Gaspar said. “They continued to overcome everything thrown at them up until the very end and gave everything they had when they went on the floor.”

Senior Kalli Ward embraced every moment of her last season, from cheering on Brophy football to performing on the national stage.

“For the first time in a while, we had a completely normal competition season,” Kalli said. “It was so much fun to be back out on the floor doing our favorite thing and showing the judges what we have been working on. Pom and cheer qualified for both state and nationals and put on phenomenal performances.”